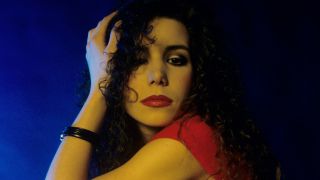 “I knew it was wrong, but I felt the need…” - Under Your Spell

There weren’t a whole lot of women on stage during the Flash Metal era, and if they were, they were usually sporting some ridiculous leather n’ lingerie ensemble. But underneath, they were all pretty tough women. Lita Ford, Leather Angel, Madam X, Black Lace’s Maryann Scandiffio, Betsy Bitch, Hellion’s Anne Boleyn - ass kickers, every one of ‘em. They’d have to be, really, in an arena as sexist-by-design as 80s heavy metal. Not Lee Aaron, tho. She took a different route. She was the petite, doll-faced pin-up queen of 80s metal, the kinda girl guys would’ve painted on the nose of their fighter planes before bombing the pacific. Heavy metal didn’t have any bubble-gum chewing teen-dream charmers like Lee, and clearly, we needed one. So we got one.

But let’s back up for a moment. In the beginning, she was just plain ol’ Karen Lynn Greening, born in 1962 in Belleville, Ontario, 100 miles east of Toronto. At the age of 15, she joined a band called Lee Aaron as a keyboard player/back-up singer, but when she graduated to lead singer, she adopted the band name as her own. Then she hooked up with some starry eyed manager, went solo, and left those dopes to die. It was an Alice Cooper type situation, minus the whiskey and snakes.

I don’t blame you if you don’t know who any of these cats are, but she scored a real rock n’ roll hoochie-coup by getting Santers - a pseudo-flash metal band led by Canuck guitar hero Rick Santers - as her backing band. She toured Ontario, and then recorded this 4 track EP in 1982 with an all-star line-up (in Canadian terms, anyway), that featured Santers, Rik Emmett from Triumph, and various members of Moxy and Wrabit. That’s right, Wrabit. Canada is a whole different world, man.

I should mention that the version of this record most people are familiar with is the 1984 picture disc reissue on Azra, the infuriatingly dodgy LA label/pressing plant that put out seminal pic-discs by many long-gone Hollywood flash metal bands like The Wild, Kery Doll, and Sin. It’s a one-sided picture disc. I mean, there’s pictures on both sides, but you can only play one of them. The un-playable side has a copy of the March ’83 skin mag Oui on it. Lee’s on the cover, wearing what appears to be about half of Pete Way’s black and white striped jumpsuit. Incidentally, she has a nude layout in that issue. On the flip, she’s posing in red leather hotpants and a halter-top. The picture was originally from the cover of Hot Wacks magazine, which seems entirely appropriate to me.

So anyway, the songs. I Like My Rock Hard (!) was written by Frank Soda, a Canadian comedian/musician, who had a jokey hard rock band in the very early 80’s called The Imps. Years later, be went on to become a much-loved Canuck TV star, specialising in Saturday Night Live-styled satires. It stands to reason, then, that Rock Hard is a Spinal Tap-esque satire itself, which would certainly explain ham-fisted lines like “The boys are shakin’ all they got/the guitars are screamin’, red hot!” and “I like it hard, when I wanna rock/ Cuz when it hard, I just can’t stop”. I mean, if that’s NOT supposed to be funny, then we’re in trouble. Despite the saucy title and the tough chick lyrics, however, Rock Hard is decidedly limp, a sluggish pseudo-rocker that sounds more like the hippie hard rock of Cheetah (Ya know, Rock n’ Roll Women) then, say, the raunchy, girl-powered flash metal of Bitch or Black Lace.

Under Your Spell, written by Lee herself, is supposed to be a gooey arena-pop number, like Journey or something, and even tho Lee coos nicely on it, it sounds pretty fuckin’ dated, even for 1982. This probably has something to do with Rik Emmett playing guitar on it, because I don’t think Triumph ever sounded contemporary, ever (Fact: Triumph are still huge in Iowa!). Lonely For Your Love is the best song on the EP, and it’s actually a pretty great glammy power-pop tune, kinda like vintage Pat Benatar, with soaring hard rock guitars. Lee actually sings — as opposed to chirps — on this one too, and it turns out, she’s got a pretty impressive Janis-style howl on her, once she gets warmed up. A semi-heavy blues-fuzz cover of I Just Wanna Make Love to You, a song originally written by Willie Dixon and covered by everyone from Muddy Waters and Ann Margret to (most notably, for most rockers, especially Canadian ones) April Wine, closes out the EP. Alright to listen to, much better to look at.

By the time the re-release hit the stores, Lee was already big news in Europe, and her first international hit, 1984’s Metal Queen, pretty much sealed her fate for the next ten years. That’s what every magazine called her after that, the “Metal Queen”, even tho I defy you to dig up one actual metal song from her entire catalog. She still rode the wave, though, releasing another mock-flash metal record, Call of the Wild in 1987. As the 80s wore on, she started shying away from the “metal queen” image, and switched over to lighter dance/rock stuff, establishing herself as a sort of hard rockin’ Samantha Fox. She scored a couple of UK hits with ‘89’s Bodyrock album, but just to prove that she was still prone to recording really dumb songs, Bodyrock included a song called Rock the Hard Way (sample lyric: “You’ve gotta rock the hard way /Rock the hard way., yeah/Rock the hard way/ Rock the hard way, or don’t rock no way at all!” ).

Although Lee has continued to successfully release albums over the years, the “Metal Queen” schtick has been mothballed for decades now. She’s known mostly as a jazz singer these days, and doesn’t wear red leather hotpants nearly as much.

So, where’s the Flash Metal Suicide come in? Just ask Lee, man. Getting pegged by the world at large as the “Metal Queen” when you’re really the Canadian Puffball Chick-Rock Queen can be a bitch.

So, who is the REAL“Metal Queen”? C’mon, man. Let’s just hand the barbed-wire tiara to Doro Pesch and call it a fuckin’ night.