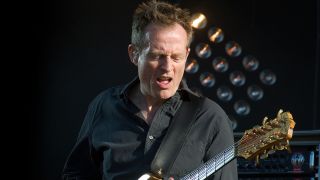 Your parents made careers in the arts…

They were in variety. And when my mother left the road, my dad carried on for a bit. I would have liked to have gone to art college, but I was crap at drawing. And I’m glad I didn’t go. In the end I turned professional at sixteen. Every Monday I’d stand on the corner of Archer Street in Soho, where all the musicians used to hang out. Eventually I saw Jet Harris and asked him if he wanted a bass player.

Did it take a certain amount of courage?

Oh yeah. I’d seen him for a couple of weeks but couldn’t bring myself to ask. At first he told me that he didn’t need anyone, and instead pointed me to the band he’d just left, which was [jazz-rock combo] the Jet Black’s. I went to audition for them, but Jet heard me and liked it. He was just starting The Shadows with Tony [Meehan] and said: “Right, you’re coming with us.”

In the sixties you also became known as an arranger. Was that connected to your father having been a pianist and arranger for big bands in the post-war years?

I suppose that’s where I got the idea. My dad had said to me: “Never turn down work.” So when somebody asked if I could do it, I said: “Yeah, of course.” That’s when I went out and got a book, which basically taught you how to orchestrate. In the studio I quickly realised that you’ve got to listen to the producer and the artist to make it all happen. So I was always learning. In fact, I still am. It doesn’t matter how old you are, that never stops.