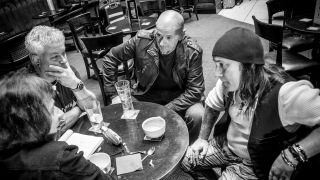 Which were your most famous moments? Harry ‘Hiroshima’ Hill (Fist, above middle):

Probably the reaction we got on some of the dates when we supported UFO in 1981. Unfortunately Fist wasn’t the sort of band where you had young lady admirers, it was lads wanting to talk about drums and guitars. I knew we’d got it wrong.

Robb Weir (Tygers Of Pan Tang, above left): Walking out on the B stage at the Reading festival in 1982 to headline. Iron Maiden were headlining the A stage, and we preceded them on the B stage. It was an indescribable feeling to have forty-two-thousand people quite happy to be wooed by our songs.

Jeff ‘Mantas’ Dunn (Venom, above right): I’ve had a lot of venue owners and promoters come up to me and say: “It’s an honour to have you here – the guitarist from Venom!” I tell him it’s an honour for us to present our music to an appreciative audience. Without them we don’t exist.

Do you feel famous, Jeff?

JD: [Laughing] I’ve got to say yes. When we did the Venom reunion gigs in 1995, we warmed up at the Wâldrock festival where there were twenty-five-thousand people. We then played the Dynamo festival in front of eighty-nine-thousand people. We came up on a hydraulic platform, they put the searchlights on the crowd and I went: “Fuck me.”

Your NWOBHM contemporaries Def Leppard and Iron Maiden went on to huge success. Do you feel envious?

RW: No. It was the right place at the right time.

HH: Envious but not jealous, if that makes sense. Maiden and Leppard are riding high and I’d have loved to have been up there. Fist played with Maiden at the Marquee in London and I thought they were great. They went for it, had good management and weren’t frightened to make line-up changes. Maiden were living it. We had our toes in the water but we didn’t give it a hundred-and-fifty per cent. That’s the difference.

JD: No. Venom played lots of big gigs. I love being on the big stages; love the thought of being the headliner at a festival. But even playing small clubs, as I’m doing now, I’m still playing Madison Square Garden. It would be nice if M:Pire Of Evil, my new band, got even half what Venom got.

When you look back, what missed opportunities do you see?

HH: The production of Turn The Hell On – our first album, by Derek Lawrence, who’d produced Wishbone Ash – wasn’t what we expected. We should’ve said: “That doesn’t sound like Fist, it sounds like Wishbone Ash.” We should have said it needed remixing, which could have made a massive difference as we had forty dates on the UFO tour to promote it.

_JD: _Venom should at some point have gone out and supported a Judas Priest or someone like that. We were always the headliners. Metallica supported us, but then Peter Mensch got involved in their management and Metallica went up and we didn’t. In those days a lot of ‘management’ was just friends or people you knew. Our manager, Eric Cook, was just a mate of the band, but he looked best in a suit. He learnt his craft as he went along.

RW: The Tygers had the very strong possibility of going to Europe to open up for Rainbow. We had_ The Cage_ album out and everything was going swimmingly. Our manager, Tom Noble, was due to fly out to Germany to discuss it with Bruce Payne, Rainbow’s manager, and handshake the deal. I can’t quite remember why, but for some reason Tom didn’t go and Girlschool got the whole European tour instead.

What were the best and worst bits of the NWOBHM?

RW: In 1981 when we were selling out city halls, the penny dropped that I must be doing something right, otherwise the crowds wouldn’t be there. The main bad bit was being forced out of the Tygers along with Brian [Dick, drummer]. As far as I can gather, the other band members were guided by our London agent and took his advice. Clearly the agent’s advice was very wrong, because soon after, the band imploded. So I rang Brian, and within half an hour we’d formed a new band, Sergeant.

HH: Being a musician, the highs are high and the lows are really low. Like when you’ve got no money, you’re halfway down the motorway, you’re running out of petrol, the gig was shit, the attendance was crap, it’s pissing down and you’ve just broken both your bass-drum pedals.

JD: I don’t think there were any bad bits for me. The NWOBHM brought rock and metal back to the forefront. It really was an explosion of bands.

All of you have at times had jobs outside music. How was that?

JD: I worked at the Freeman Hospital in Newcastle for two-and-a-half years in the operating theatres, from 1987 to ’89. I’ve got total respect for doctors and nurses, and I worked with some great people. But it made me realise that it wasn’t the music business I was sick of, it was the whole situation with Venom.

RW: I’ve worked on the railways, first on the Metro and now on the East Coast Mainline, for years. I’ve also had a jewellery shop, and ran a care home with my wife. You put being a professional musician into your memory for future reference.

HH: I’ve managed pubs, been involved in double-glazing sales and am now playing rock covers in a local band. I played with a club band for years, and also with Eric Bell from Thin Lizzy.

JD: There’s been two loves of my life all the way through: music and martial arts, which I’ve done since I was ten years old.

What are your bands currently up to?

RW: The Tygers are doing tours and festivals in Europe.

_HH: _Fist have re-formed. We did Brofest in February and we’ve got European gigs next year.

JD: M:Pire Of Evil are recording an album. We play France in July, Singapore in August and North and South America in the autumn. There’s no original Venom reunion on the cards.