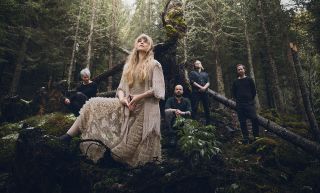 For those, who have followed Gåte since their founding in the year 1999, some of the elements of Huldra will sound familiar. After all these years, the unique blend of rock and traditional Norwegian music still sounds as fresh and thrilling as in the early years between 2001 to 2006. Yet this new single sets a darker tone and adds a harder edge to Gåte's trademark sound.

Those, who will inevitably draw comparisons to Wardruna, Heilung, and the more sinister side of Eivør due to some similarity in the use of rhythmical elements or vocal phrasing will all have a point, but – especially, if they are from outside of Norway – might easily miss the fact that Gåte have been drawing from traditional music and transforming it with modern means into something new right from their beginning.

Having gone on hiatus since the release of their live album, Liva, in 2006, the band unexpectedly returned in 2017 and embarked on a triumphant tour in front of sold out venues. Following the 2017 EP Attersyn and an acclaimed third studio album, Svevn. Huldra shows the Norwegians forging ahead in exploring new dimensions of their original sound and widening their stylistic rage – a process that will reach a new creative level on Gåte's forthcoming studio album number four – of which Huldra offers a first delicious taste.

Surrender your senses to the elements and dive into Huldra below!