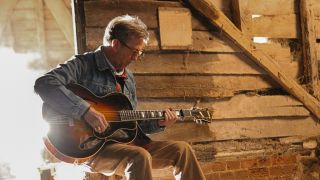 Eric Clapton: the return of Slowhand

Eric Clapton has never been one for unecessary flashiness, and at 71, the man who once stoked the fires of The Yardbirds, Cream and Derek And The Dominos remains the most unassuming guitar hero of them all.

It’s not as if he hasn’t got anything to shout about. Since ditching the Armani suits and reconnecting with his blues roots on 2004’s Robert Johnson tribute, Me And Mr. Johnson, he’s enjoyed a late-career resurgence as a true elder statesman of the blues and roots music. It’s a place the man once infamously dubbed “God” seems to be hugely comfortable with.

Clapton’s forthcoming album, I Still Do, finds him reuniting with producer Glyn Johns for the first time since 1977’s best-selling Slowhand. In this exclusive interview, the guitarist looks back on resurrecting old friendships, the passage of time and physical and emotional pain.

What made you get back in touch with Glyn Johns?

“He got in touch with me, to read his autobiography and make a comment on it which would be for use with promotion. I’m in it quite a lot - well, a little bit - so I agreed to do it. There was a little bit of banter at the beginning. In it, it says that when he first met me he didn’t think that much of me - actually I was a pretty scaly character and he was quite right in feeling that way - but as time passed we grew to like one another. Then due to contractual things I think I moved on from working with Glyn to I think Tom Dowd or Phil Collins - I went off in one direction or another… And he thought, well, we’re not friends anymore. So I thought, ‘I’ll get in touch with him’, so I did. I gave him a call, and said, ‘Let’s go out for a bite to eat just to prove that we are still mates.’ And during that dinner I said we should do something, just to celebrate the coming up of our 40th anniversary. So we booked some time and went in the studio.”

You describe Glyn in your book as a disciplinarian. I imagine he had less disciplining to do this time than the last time, particularly during the Slowhand sessions, which were somewhat alcohol-enhanced?

“Well, a little bit. But he’s still two years older than me, and believe it or not that never seems to go away. I mean, I’m 71, he’s 73 I think, and he still thinks he’s got - well, he has, he’s got seniority. And he’ll exercise that when he can. But the advancing years and the passing of time have made us both a little bit suspect when it comes to memory of details, so every now and then we manage to trip one another up. So no one’s got the edge, really.”

On the new album, is the track Spiral about the virtuous - or vicious - cycle of needing to sing the blues because of painful events but also needing painful events to sing about?

“Not really. It’s quite abstract - it’s about my compulsion to play and my love for music.”

Would fans of Five Live Yardbirds be horrified by the cover of 40s standard I’ll Be Seeing You because in a way you arrived as the hot young electric blues kid to blow that sort of “sappy” jazz-standard era of music away, didn’t you?

“Ah, that’s interesting. [Ponders for a while]. Would it surprise you if I told you that all through that [mid-60s hothouse] period, from when I was in John Mayall’s Bluesbreakers and Cream, that I had a secret reverence for all of that.”

“Yeah. I’ll tell you what, though. It took me all this time to understand Frank Sinatra - that’s been really difficult. And I think it might have something to do with the fact that he is so highly revered. And often my response to that idolatry is to go, ‘Nah’ - to trash it and go looking for something more obscure. Because he was so familiar and popular. And bit by bit I’ve had to come to terms with the fact that he was a genius. And I’m not sure I’m really comfortable with saying that even now. Because I’ve still got this sort of prejudice. And I think that’s kind of what you’re talking about. It’s almost like having a punk attitude, it’s like, ‘Nah - that’s gone before.’ But actually I see myself more as a musicologist: I see how it’s all connected. And when I think about Sinatra and Bing Crosby and Louis Armstrong - those guys were serious. Dean Martin I don’t get at all, or Sammy Davis Jr, they were kind of lightweights. But Frank Sinatra could actually really do deep emotional work, but I didn’t want to admit it till the last couple of years.”

Is there a negative attraction to the blues because of what’s required to sing it authentically?

“I don’t think so. [Reconsiders] Well, I don’t know, you know? Under hypnotic analysis maybe there would be a connection, and there’s no doubt that when I was first exposed to it my life as a young boy was in a fair amount of turmoil, there was pain, but I don’t know… I think what I felt about blues music was that it was a very, very safe place to escape to because it was genuine. And all of the stuff that I was hearing on the radio as a kid other than that seemed to be entertainment - do you know what I mean? It was contrived to entertain. Whereas blues music almost came as a compulsion from the heart. And it was easy to hear that. It was self-evident to me. I mean, anytime I hear blues music it’s self-evident that the guy singing it has to sing it. And I think I identify with that. Even now, I don’t link pain and suffering with blues music. I’ve heard people say, ‘Oh, it’s depressing’ or ‘doesn’t it get you down?’ And I find it enlightening. I get the oppose effect from it.”

Catch The Blues finds you ‘living in a world of pain’. But then you sing - I didn’t know if you’re referring to God or your wife - ‘without you making a difference, Lord, I’d be going insane.’

“Well, that’s to do with the physical problems I’ve been having, and getting old. But it’s also about God and my wife.”

It would seem your capacity for enduring pain is a matter of record - both physical and emotional.

“Well yeah, I’ve had my fair share, but that might equate as a price I pay for the joy that I also get from playing music. Often these things go hand in hand. It’s not just a hobby for me, it’s a real commitment, and a love. I would hesitate to put things in order in terms of their importance, whether or not it’s being sober or in terms of the love of my wife and family or the ability to make music. I’ve had to actually question all of these things and so I would hate to be put in that position. But the ability - the gift - of being able to make music is very, very important to me.”

Do you pray daily?

“I do, yeah. I do. I’m lucky to be alive - well, not lucky, I don’t believe in luck; I say ‘lucky’ but I mean ‘fortunate’. For some reason I’m still here so I see that [praying] as the same as brushing my teeth and putting on my clothes; I see it as an act of humility which gets me looking at the day the right way before I start running amok with ego.”