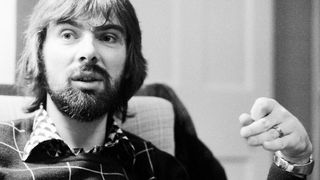 He's worked with all the greats: The Beatles, The Stones, The Who, The Eagles, The Clash, Led Zeppelin. So we asked uber-producer Glyn Johns ton pick his six favourites...

“That was my third ever production. I did The Easybeats debut album but it never got released, followed by The Steve Miller Band’s Children Of The Future, and then this - I did that and Sailor in the same year.

“I’d already engineered The Beatles, The Rolling Stones, and more. When it came to doing The Steve Miller Band, Steve was supposed to be producing. We had six weeks to make the record and after a month they’d not achieved anything, just dicked around, and I’d got really bored.

"So I said to him, ‘Sorry, mate, but I can’t do this anymore. You’re wasting my time and everybody else’s. You’re never going to make a record like this. I’m off.’ So he panicked a bit and said, ‘Well, what can we do?’ I said, You need somebody to produce you. He said, ‘Would you do it?’ and I said, Yeah. So I got the job on the spot. We made Children Of The Future in two weeks.

“Steve then wrote to me, saying he wanted to make the next album in America. So we made Sailor in San Francisco and Los Angeles. It was quite a strange experience. He told me he wanted to make an album with a story and I said, Okay. And he said he wanted to change the name of the band - this was just after Sgt Pepper’s - so I told him he needed to write a bunch of songs about a sailor returning to the United States after being away for years. That way you can pass comment on the political changes and romances that have gone wrong…

"The beginning of the record is supposedly the sailor returning to San Francisco harbour, which I come up with. The weirdest thing about that is, because of the enormous use of drugs at that point in everybody’s lives - apart from mine - nearly everyone I knew thought I was completely out of my head on LSD! Which is complete and utter nonsense - I was as boringly straight as I am now.”

“The whole experience was quite extraordinary. Dazed and Confused is astonishing. Whatever effect it had on you, it had triple the effect on me - because I was there. I had known Jimmy [Page] and John [Paul Jones] for years - Jimmy and I grew up in the same town and had known each other since we were teenagers, and John was always the No 1 session bass-player so I used to see him every day when I was an engineer.

"Anyway, Jimmy rang me out of the blue one day and said, ‘I’m putting a band together, will you make a record with us?’ And I said, Yes. I turned up at the first session not really knowing what I was walking into. And the realty is, they were so well-rehearsed and sorted. The whole thing was a bit of a blur - we made the record in nine days. That shows you how together they were.

"That unearthly power? It was a combination of all four of them. Any great band, you take one element away and it’s absolutely not the same. Obviously Jimmy was the driving force, but I don’t think John Paul Jones gets nearly enough credit for his input. But equally John Bonham - technically he was an absolute genius, and the sound he got was just extraordinary. And then you put Plant on top - who’d ever heard anything like him before? It was an amazing combination.

“As we were finishing the album we were putting together The Rolling Stones’ Rock and Roll Circus TV show, trying to decide who else should go on the bill. So I took an acetate of the Zeppelin album and played it to Mick [Jagger] and said to him, ‘Jimmy’s put this band together, they’re going to be fucking huge.’ And he didn’t get it at all - he thought it was awful. Same with George Harrison. I played him it and he didn’t get it either. So two people from the previous generation didn’t get it at all. That was really amazing to me cos I was blown away by it.”

“There was no trick to it. I’d worked with the band in an engineering capacity so obviously I knew all the material inside out. They recorded it at the end of a tour so they were well played in. That lineup of the band with Mick Taylor and Nicky Hopkins was pretty extraordinary, really. They made a massive difference to what the band was able to do. Although Brian Jones was a great musician, they didn’t have a lead guitar player, and Mick Taylor was exactly that. That broadened their horizons, sonically.

“If you record The Rolling Stones live, you turn up, you record the concert and you go home. It’s all over and done with. If you make an album with them, you can be there for years! It takes a lot of effort to sound that loose. A lot of that [engineering Beggars Banquet and Let It Bleed] was hanging around waiting for people to show up. Keith’s method of writing was very laboured, and done in the studio.

“For Ya-Ya’s we recorded more than one concert and it was a matter of choosing the right take from the right concert. I mixed the record on my own - normally Mick and Keith were there - but they came and checked it afterwards. Lester Bangs called it ‘the best rock concert put on record’. But what does he know?”

“This was originally going to be the Lifehouse project. We all had a meeting - the band, [manager] Bill Curbishley and I - and we got sent a script of the movie and I’d been sent acetates of Pete’s extraordinary demos. At the meeting I said I didn’t understand the script. I wasn’t being rude, just pleading ignorance. Everyone else agreed, thankfully. But musically it was astonishing.

“You can’t compare The Who to the Stones or Zeppelin - they’re all completely different. The Who is a combination of three extraordinary musicians - again, if you took any one of them away… The combination of Entwistle, Moon’s flamboyance and Pete Townshend was like nothing I’d ever heard. It was never discussed, it was just the musical chemistry between them, and the energy level. It was peculiar to them, along with Roger Daltrey’s voice which certainly contributed to the energy and power of the band. And the icing on the cake was Townshend’s material which was completely extraordinary.

“You have to have a relationship with the band - The Small Faces I worked with practically from the first record they ever made almost to the last. And although I never got credit as producer in the studio we were like a unit, absolutely. With The Rolling Stones, on the other hand, I was the engineer and that was it, even though I worked with them for 15 years and spent more time with them than I did my own family. But I was never accepted in that way [as an auxiliary member]. I don’t know if it’s healthy. It’s more important to keep a lid on it and know that you’re providing a service.”

“I like both the Eagles albums I worked on [Eagles and 1973’s Desperado]. Apart from Bernie Leadon, who was quite experienced, the others were naive and looked to me for arrangements and sound. They got more confident on Desperado, recording a lot more of their own material.

“The others I got on great with. Glenn wanted to get high in the studio and I wouldn’t let him. It wasn’t anything musical. But that thing about me being strict in the studio is bollocks! Then again, I tried being nice for a while and it didn’t really work. Schoolmasterly? I spent years, very long days, with people stoned out of their tree and the minute I had control over them I decided I wouldn’t put up with it any more because I’d wasted so much of my life waiting for people to get their shit together.

"If you wanted to do that, you should go somewhere else - which is what the Eagles did. We were halfway through the third album [On The Border, 1974] when conflict grew: Henley and Frey had wanted to establish themselves as the leaders of the band back on the first two albums and I wouldn’t let it happen.

“But with On The Border they ran out of material and enthusiasm and Frey was pissed off with me - I didn’t agree with the way he and Henley were trying to take control of the band to the detriment of the other guys - so they had me removed and they went and got Bill Szymczyk and spent a year making that record, which gives you a bit of a clue. I spent six weeks making the first two albums.”

“It was CBS Head of A&R Muff Winwood’s idea for me to do this. Was Mick Jones miffed that the album largely got recorded without his involvement? That’s a bit of an understatement. He was extremely annoyed. I was asked to mix the album - I didn’t produce it - they turned it in as a double album and CBS were not very happy. They called me in, asked whether I’d be interested in mixing it, and I met with their manager and Joe Strummer and agreed to do it. I mixed it at my studio.

"We started at 10am and Joe was there at 9.45am and we worked all day. Mick didn’t turn up till 7pm and I’d already mixed four or five tracks. He came in and I said, ‘I’ll play you what we’ve been up to today.’ I played them all back and he sat there with a pencil and pad and was making notes and he went, ‘Okay, these are the changes I want you to make.’ I said, I’m not making any changes, I’ve done it.

"So he got a bit miffed. I said, if you’d have been here at 10am I’d have been very interested to hear what observations you had while I was doing it. If you think I’m going to do them all again for you because you can’t be bothered to turn up till 7 in the evening, you’re wrong, mate.”

The following day I rang CBS and told them Mick Jones didn’t want me to mix the album but they’d spoken to him and he’d apparently agreed to let me and Joe get on with it. I think Mick liked the album in the end.”

Glen Johns’ autobiography, Sound Man: A Life Recording Hits with The Rolling Stones, The Who, Led Zeppelin, The Eagles , Eric Clapton, The Faces…, is out now.