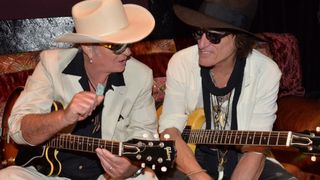 Aerosmith guitarist Joe Perry recently teamed up with oft-overlooked Brit vocal powerhouse Terry Reid to write and record a brand new song. The track in question is I’ll Do Happiness and will feature on the covermount CD of the very next issue of Classic Rock magazine (on sale April 20). But, as an exclusive preview, you can hear what Joe has to say about it and hear it here first.

Before Christmas you’d said that your album was going to be mainly instrumental, so is I’ll Do Happiness with Terry Reid one of the few tracks with vocals?

“Well, originally, it was kinda going that way. But I’ve been spending a lot of time in LA and that’s given me the opportunity to try some different things with some different people. All the other solo records I’ve done have been in Boston, and there’s a lot of great talent there, but there’s so many great singers out in LA and they tend to be around between tours, so that opens up new possibilities.

“For instance, one day I got a call saying ‘Oh, how would you feel about doing something with David Johansen?’ and the next thing you know he’s in the studio. He’s an old friend, we wrote some songs together in the 70s, but I hadn’t seen him since the Dolls toured their last record [2011’s Dancing Backward In High Heels]. So he came out and we wrote some songs and sang them and they turned out great. And then [producer] Jack Douglas mentioned that he knew Terry Reid and that he lived only a few hours away and I had the opportunity to get together with him too.

“Terry wasn’t that big here in the States in the late 60s, but I had friends who would go to England every summer and bring back piles of albums, and so I was lucky enough to know about him and when I heard him I thought his voice was incredible. So he came in and we got to know each other a little bit and played some tunes, and wrote some songs, and he was just great to work with. And so I wanted to get something out there for people to hear. I haven’t actually decided how I’m going to release some of this music, because I don’t really know if putting out an album is the right way to go, if people don’t buy albums the way they used to.

“But yeah, going back to your question, it seems now that the album is leaning towards more vocals on songs, because I’m getting to work with great singers and it’s been a lot of fun. But it might be that we release an instrumental EP and an EP of vocal stuff, I don’t know: we’re just cranking out the songs, and we’re having conversations about how we get it out there. But I wanted to get one of these Terry Reid songs out because they turned out really good. There’s been some pieces in some of the big newspapers out here which have been about people re-discovering his talent, so the timing is kinda falling together.

“I’m excited to get it out there. I had a really great time just hanging with Terry, he’s a really ‘up’ guy, and he’s a class act in the studio; he writes the lyrics on the spot and he just nails the vocals. I don’t know what his schedule is exactly, but I’d really like to work with him a couple more times if we can get our schedules to match up.”

Are you still recording and accumulating songs then?

“Every day. I go to the studio almost every day and we’ve been talking about cutting some new tracks for Hollywood Vampires so I’m also writing songs that I think would work with Alice [Cooper] singing. We’re going to be touring towards the summer and it’d be really good to have some new tunes out there, as well as the songs on the record that came out around Christmas. So that’s kinda on the list as well.”

Have people started to approach you about contributing to the solo album?

“Well, word is starting to get around that I’m working on music, and so I’m starting to get phone calls. Most people though think I live in Boston – well, I do, but I mean I’m out here [LA] now – so they’re not used to the idea of me being around. But I played on a track with [rapper] Pitbull, and I may be doing some live gigs with him and I may yet be working on a song or two with him, I don’t know. But there’s a lot of opportunities here, so I’m taking advantage of it.”

Is there anything you writing that you’re setting aside for Aerosmith?

“I really don’t know what’s going to fit where, but there’s some stuff I’ve been writing that I wouldn’t have anyone else sing but Alice, for the Vampires. But there’s tracks that I think will work as instrumentals and then some cat will come into the studio and we’ll give it a shot with vocals, and then it’s not an instrumental anymore. But yeah, I know I’ll end up with a batch of material that we could maybe look at for that band.”

Is there no deadline for the music you’re working on now?

“I don’t know, we’ll be here for another couple of months. But we’re planning a Hollywood Vampires tour for the early part of the summer, and there’s some vague plans for Aerosmith to tour in the Fall, but we’ll see how that goes.”

The next issue of Classic Rock, featuring Joe Perry and Terry Reid on the cover CD, is published on April 20.