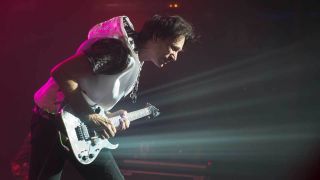 Before coming to fame with a heart-shaped guitar and providing flash and bombast for stadium crowds who’d turned out to see David Coverdale or David Lee Roth, Steve Vai and his ‘stunt guitar’ playing were at the heart of Frank Zappa’s grand designs.

While in high school Vai took guitar lessons from an older student called Joe Satriani. It was the kind of musical start-up that would lead the young prodigy to the acclaimed Berklee School of Music. While there, Vai spent his spare time transcribing the more intricate passages of Zappa’s work, culminating in a transcript of the brain-achingly complex The Black Page (like unravelling The Gordian knot while wearing boxing gloves), which eventually found its way into Zappa’s hands and earned him a place in his band.

He joined Whitesnake for a reported $1million, but perhaps more importantly he released his own magical Passion And Warfare album a year later. And while he’ll still apparently guest on the record of anyone who has his phone number, those solo albums have, thankfully, kept on coming.

A complete DIY job and made, in part, with the money Vai had made working for Zappa. The young Steve Vai bought his first house, converted the garden shed into a studio and created the first cornerstone of his solo career. Inexplicably good in parts – the rambunctious The Attitude Sons, which acts as a pointer towards which way a lot of his solo work would go, and the almost profound Call It Sleep - and just inexplicable in others. Understandably, it has the stamp of Frank all over it, some vocal melodies, arrangements, even musical asides, check out Little Green Men and There’s Something Dead In Here, but it’s an almost assured first step.

Following the acclaimed Passion And Warfare was always going to be a thankless task, but no one could have expected the backlash awaiting Vai’s hard rock band project VAI. The guitarist himself admits that he’s “still stunned from the beating I received from the press”. We’re surprised too.

Vai has since admitted that artistically he might have wanted more songwriting control than the band were willing to give, but overall Sex & Religion has held up well since its release in 1993. Devin Townsend’s vocals may be a little exacting at times, but this album will surprise you with its creative depth and willingness to experiment.

His last solo album of original material until 2005’s conceptual album, Real Illusions: Reflections, The Ultra Zone saw collaborations with multi-platinum Japanese duo B’z on the pulsing (and poppy) Asian Sky. Vai flexed all his musical muscles with two tributes: one to Stevie Ray Vaughan, the other to his former band mate and friend, Frank Zappa. The roiling Jibboom (imagine if SRV and SV had somehow conceived a lovechild and you’re close) stutters and grooves, while Frank is a slow building riff to a solo that is an exercise in eloquence itself.

A concept album of sorts, divided as it was into two phases, it also proved that not only could Vai play the guitar like an angel, he could sing like the devil too. Well, not quite, but he holds the lead vocals on the second half of this album with something like aplomb. The grandstanding instrumental Dyin’ Day gives Ozzy an unlikely co-credit as it came out of the original writing sessions for Ozzmosis, though what Ozzy might have brought to this particular party is very hard to fathom. The story itself is based on a script Vai wrote called Fire Coma, the script’s still on a shelf somewhere, it’ll have to go some way to match the music it inspired

Strangely, this latest Steve Vai album is nothing of the sort. It’s the missing link to the music he made and recorded between Flex-Able and Passion And Warfare. Perhaps more tellingly, one album was made in his early twenties, the next as he was approaching thirty. This is an amalgam of both and flits between hard pop with a twist in a song like Mighty Messengers, and the skewed exclamation of a song like Bop!, which sounds, incredibly, like Zappa meets Japanese electro. Vai doesn’t stipulate between the tracks that were earmarked for Passion… but never made the cut, though the dancing Upanishads must have come close, rising ever upwards before floating magically away.

Part two of the story that Vai began to tell on 2005’s Real Illusions: Reflections album. The concept, as much as it can be picked apart, details the journey of a man driven mad by grief. Well, you have to start somewhere. It’s pretty much a blank canvas for Vai though and, oddly, one of his most cohesive albums, at points it’s very nearly straightforward. It’s also a reminder of how well he works with another strong voice, listen to his take on the traditional gospel standard John The Revelator backing up former The Voice contestant Beverly McClellan. It’s startling. While at the other end of the spectrum, he lets Aimee Mann do the heavy lifting on the elegant No More Amsterdam.

Part one of his fabled concept trilogy that continued with Real Illusions…, though there’s still no word on when we might eventually see or hear part three. Presented as a series of vignettes and loosely based around the voyages of a mad man seeking truth (who isn’t?), it gives the guitarist freedom to run roughshod over songwriting conventions, even if he can easily peel off a song like Firewall; a funky four minutes peppered with stabs of trumpet and a breakdown that could make David Lee Roth get up and dance. While Freak Show Excess sounds like he might have three hands – and possibly a couple of extra digits on each. It’s not all blurry finger-work though; the dazzling, and Grammy-nominated, Lotus Feet is a wonderful exercise in restraint.

Without question, Vai’s best solo album: less about his staggering technique and more about his abilities as a composer, Passion And Warfare is as entrancing as it is illustrious. Raucous and good-humoured on tracks like the strutting The Audience Is Listening, wilfully experimental with Alien Water Kiss, simply on a tear with Greasy Kid’s Stuff, while Blue Powder is reflective and genteel, fragile and full of grace. Vai reportedly fasted and meditated for days before he committed For The Love Of God to tape, and his dedication paid off with a wonderful piece, uplifting and epic, it’s little wonder it garnered him all the awards that it did.

Steve Vai: the 10 Records That Changed My Life