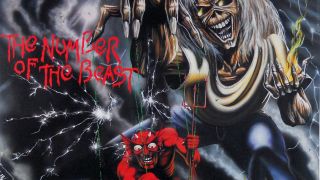 Iron Maiden\u2019s Number Of The Beast: what's the best song?

Widely regarded as one of the greatest heavy metal albums of all time, and rightly so, The Number Of The Beast turned Iron Maiden into superstars. Their first album with Bruce Dickinson, it brought them top 10 hits in the UK and established them as major players on the world stage. It also contains some of the finest songs ever written in the name of heavy metal, which means that putting them into some kind of qualitative order is a major pain in the arse. Here we go, then…

This one is easy, at least. Gangland is by far the weakest track on TNOTB. In fact it’s the only song on it that could credibly be described as weak on any level. Gangland does have strong points, of course: Clive Burr’s thunderous opening drum salvo, some typically glorious solos from Adrian Smith and Dave Murray and Maiden at 98 per cent effectiveness is still twice as good as most bands at 100 per cent. But still, Gangland is the only option for the bottom of this largely immaculate heap.

It’s fairly obvious why the Viking-themed Invaders was picked as TNOTB’s opening track. It’s fast, furious and makes no bones about the supreme confidence that was driving the Maiden juggernaut along at this point. You might argue that Invaders is a little lightweight compared to the album’s more adventurous material, but it still catapults adrenalin directly into your face. Plus, you can join in by shrieking “Invaaaaaaaaaders!” during the chorus.

This is where it gets tricky. The Prisoner is magnificent, from the opening drama of dialogue from the titular TV show, featuring the late, great Patrick McGoohan, through to that monstrous opening riff and on to one of the biggest choruses Maiden have ever produced. McGoohan gave his personal approval for the band to use his voice, and it’s not hard to imagine why. Who wouldn’t want to be associated with the most exciting young band on the planet?

Essentially a sequel to the equally fiery Charlotte The Harlot from Maiden’s eponymous debut, 22 Acacia Avenue is a great example of the band’s gift for telling stories and writing music that drags an audience along for the narrative ride. Originally a song by Adrian Smith’s earlier band Urchin, it was reshaped by Steve Harris for Maiden’s third album and duly showcased Maiden’s mastery of tempo changes and elaborate arrangements. It also kicks arse.

A Top 10 hit in the UK when it was released as a single early in 1982, Run To The Hills is one of the most celebrated metal anthems of all time. It introduced everyone to the ‘Air Raid Siren’ – that’s Bruce Dickinson, obviously – and completely nailed Maiden’s swashbuckling, gung-ho approach and insane levels of energy in just under four minutes of triumphant, euphoric heavy metal abandon. It’s still ridiculously exciting 34 years later, despite regularly falling from favour in the band’s live sets. Run To The Hills is, inevitably, the people’s choice.

3. Children Of The Damned

“He’s walking like a small child/But watch his eyes burn you away…” Metal fans of a certain age (and many much younger) are guaranteed to be a mess of goosebumps and drool when they hear Bruce Dickinson’s opening lines on this seminal gem from an album that is full of them. Children Of The Damned starts slow, bulging with melodrama, before erupting into a wonderfully ferocious coda that could hardly be a more convincing advert for the young Maiden lineup’s collective chemistry.

2. The Number Of The Beast

When Maiden play the title track live, it only takes a couple of seconds of British actor Barry Clayton’s ominous spoken intro (“Woe to you, both earth and sea…”) before the fans are bellowing with such enthusiasm that the rest of the speech disappears. The Number Of The Beast is one of those songs that screams ‘heavy metal’. The fact that a lot of very dim religious folk got upset, wrongly assuming that Maiden were Satanists, just makes its legendary status in the band’s catalogue all the more enjoyable.

1. Hallowed Be Thy Name

Recently reinstated in Maiden live shows after a few years’ absence, Hallowed Be Thy Name brought the pre-encore curtain down on virtually every one of the band’s gigs for at least two decades after TNOTB was released in March 1982. One of their greatest ever epics, and quite possibly quintessential Maiden song, Hallowed… gives you everything that’s great about this band in seven overwhelmingly dramatic and exhilarating minutes. Machine Head, Cradle Of Filth, Dream Theater and Iced Earth have all recorded cover versions, which serves to prove what a vast influence this song – and the album that it appears on – has had on generations of metal musicians. Only mad people don’t love Iron Maiden.

Metallica: every song on the Black Album ranked from worst to best

Def Leppard's Hysteria: Every Song Ranked From Worst To Best