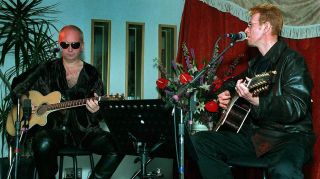 In issue 247 of Classic Rock we celebrate the greatest albums of the nineties, the decade where grunge exploded, metal got inventive, and Britrock’s green shoots showed there was plenty to celebrate this side of the Atlantic. And, in 1997, David Bowie returned to form.

The Prius of rock, Bowie was doing hybrid before hybrid was cool. As with much of his best work, Earthling juxtaposes seemingly non-related elements – aggressive guitar work and electronica. It’s fused together melodies worthy of his 70s heyday, especially on singles Little Wonder and Telling Lies. Bowie described Earthling as a “textural diary” of how it felt to be living in the last years of the millennium. And as usual it was also an accurate prediction of the future.

As well as playing guitar on the album, you were Bowie’s co-producer and co-writer on Earthling. What was the aim with that record?

There was talk that the album was jumping on the drum’n’bass bandwagon, but it’s more influenced by what came to be called electronica. David loved [electronic artists] Photek and Tricky. Those influences were in the air at the time. I never told David this, but in my head I was thinking more of Won’t Get Fooled Again – the muscular rock band with sequential information.

How did the songwriting collaboration work between the two of you?

We were both into collages. I had gotten into Pro Tools [sound recording and production software], sampling – which now seem like ancient technology. So I’d create these electronic sequences, we’d dump them into the computer, sit in the studio with our little travel guitars, and play and sing against the backing track. The other thing, both of us were art-school kids, so we loved the Burroughs cut-up method. Lyrically, David had been doing it by hand for years. And then a friend came up with a Mac program called the Verbasizer. All you had to do was put in a paragraph and it would shuffle it up. So ‘It will end in tears’ might come out as ‘It will end in chrome’ [laughs].

Doesn’t the track Dead Man Walking have a connection to Led Zeppelin?

David said that back in the sixties, Jimmy Page had shown that main riff to him. Jimmy said: “I’ve got this riff and I can’t do anything with it. Do you want it?” It does sound fairly Page-y, like a mutated Johnny Burnette Trio thing. On the Earthling tour, the band reinvented some of Bowie’s old hits. He hated playing things just like the record. He had the temperament and curiosity of a true musician. And he viewed music as art. In the thirteen years I was with him, he only gave me two comments. One: “Turn up.” And two: “Why are you playing parts so close to the record?” He wanted me to dress songs up in the clothes we’re wearing now.

What’s your opinion of Earthling today?

It’s my favourite record I did with David. We did have a sense while we were doing it that we were making something we hadn’t heard. And that was always pretty much key to most of my time with David, the fundamental manifesto – do something new that captured the zeitgeist of the time.

You can read about the greatest albums of the nineties in the latest issue of Classic Rock. Buy it online or become a TeamRock+ member to read it right now.

Classic Rock Magazine: The REAL Greatest Albums of the 90s - On Sale Now!