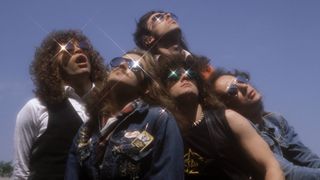 For some bands, success and all its trappings seems almost preordained; Rolls Royces and groupies drop into their hands like sweeties from a benevolent parent. Others, even ones blessed with equal or superior talent, endure perpetual struggle with little to show for their efforts or fall off the radar entirely. Whether due to ill fortune, being shafted by the men in suits, unfortunate timing, sheer self-destructive behaviour or a combination of things, some bands never have the huge sales they genuinely deserve.

Somehow, Starz are one such band. During the New York heavy rock four-piece’s four-album run, they were managed by Bill Aucoin (of Kiss fame), signed to a major label, fronted by a pin-up singer who oozed charisma, and received rave responses while opening for some of the biggest bands of the 70s. A-listers like Jon Bon Jovi, Nikki Sixx and Lars Ulrich still cite Starz as an influence; Ginger from The Wildhearts even name-checked Starz in his song 29 X The Pain. And yet mention Starz to most rock fans under the age of 30 – and many over – and all you’ll get back from them is blank looks.

An illogical journalistic cliché that is sometimes trotted out in the group’s defence is that they were just too gifted for mainstream success. “I hear that a lot,” nods former Starz guitarist Richie Ranno. “But the truth’s a lot simpler: Capitol Records sucked.”

Bassist Peter Sweval and drummer Jeffrey Grob gave Starz its backbone. Both had played in Looking Glass, who had topped the US chart in 1972 with Brandy (You’re A Fine Girl). The single was distinctly unrepresentative of that band, and three years later the Glass looked cracked. The pair hooked up with guitarist Brendan Harkin and frontman Michael Lee Smith (the latter a former Shakespearian actor and elder brother of US teen star Rex). With his big-lipped pout and swagger, Smith might have cut a Mick Jagger/Steven Tyler/ David Johansen-type figure, but he denies being influenced by The New York Dolls. “We were young and beautiful, and make-up only enhanced what we were trying to do,” he explains.

Looking Glass morphed into Fallen Angels, and after the indignity of the band being signed and dropped by Arista Records, ex-Stories lead guitarist Richie Ranno (who had also topped the US chart, with a cover of Hot Chocolate’s Brother Louie) came on board. All five band members were in their mid-20s and seasoned performers.

“After success as singles artists, most of us had gone through our drinking, taking drugs and wild living phases,” Ranno reminisces. “We were called Starz in the astrological sense, not because we were potential celebrities. Other people might’ve thought that way, and I guess it could’ve worked against us.”

Grob, too, was reborn in another guise. Joe Dubé was someone he’d seen failing spectacularly in a televised weightlifting competition, and to add extra intrigue he also dropped in the middle initial ‘X’. Mostly he was referred to simply as Dubé.

As an unsigned band, Starz had already opened for Peter Frampton and ZZ Top. Twenty years later they attribute most of the blame for what went wrong to a simple business decision: after a stampede to sign them, in January 1976 Aucoin paired Starz with California-based Capitol Records.

“Those jerk-offs,” fumes Ranno. “They were on the other side of the country. And by the time the first album came out, which wasn’t long afterwards, all the executives responsible for signing us had left. Michael was such an amazing frontman, we could win over an arena of 20,000 people who’d never heard of us. But Capitol had no vision for a hard rock band like Starz.”

The flip-side of being associated with someone as high-profile as Aucoin was that many people automatically (but quite wrongly) assumed Starz were a baby Kiss. “In that sense the association was extremely detrimental,” Ranno agrees.

The band’s 1976 self-titled debut album, produced by Jack Douglas (Aerosmith/Alice Cooper), juxtaposed radio-friendly anthems like Detroit Girls and (She’s Just A) Fallen Angel with the creepier, serial killer-inspired Night Crawler, and Pull The Plug, which was about switching off the life-support machine of a dying girlfriend. Reviewers purred with approval, but Starz stalled at No.123.

“We’d be blowing everyone away on a nightly basis, but Capitol’s inability to get product into the stores put us in a very precarious place,” Dubé reflects. On stage, Starz were indeed a tour de force. They didn’t exactly mess around off stage, either. “In the afternoons I’d hang around in shopping malls looking for schoolgirls,” Michael Lee Smith beams, adding: “Female company was my main motivation in life.”

The following year’s Violation (again produced by Douglas) produced a Top 40 hit in Cherry Baby, but despite Capitol’s prediction that the album would shift half a million copies it reached only No.89. Nobody knew it, but Starz had already peaked.

After a mismatched tour with label-mate Bob Seger, the group were asked to produce their third album, Attention Shoppers!, themselves due to Douglas having overrun recording Night In The Ruts with Aerosmith.

“We were disgusted with our management and record company,” Ranno snaps. “Kiss had become so big that Aucoin was off on another cloud. He couldn’t devote enough time to Starz, and consequently started making bad decisions. Besides our inexperience at producing, we were forced to work at some crappy studio instead of the Record Plant where we’d made the first two albums.”

“Kiss were making so much money, our management were starting to see Starz almost as this thing on the side,” Smith says. “If we were to take off, then that would be great, but if not then we could just be a tax write-off.”

With great reluctance the band sacked Peter Sweval, who was becoming musically and socially remote. Brendan Harkin followed him out the door. Starz hired bassist Orville Davis and guitarist Bobby Messano as replacements.

By 1978’s Coliseum Rock Capitol Records representatives had been banned from going backstage at the band’s concerts – “We were so pissed off, the roadies were told to throw those idiots out if they dared to show up,” Ranno laughs – which included a two-month run of shows with Rush opening for them.

Starz were rightly proud of Coliseum Rock, despite the unfortunate timing of the album. “America’s so bent on musical brainwashing, it’s the worst country in the world – period,” Ranno scowls. “All that anyone wanted to hear back then was that awful new wave crap – garbage like Joe Jackson, Elvis Costello and The Police; rock groups like ours were strangled us to death.”

When Coliseum Rock failed to chart, Starz fought to get away from Capitol Records – “They actually begged us to stay, claiming to have spent a fortune investing in our career so far,” marvels Ranno. (Aucoin tells it differently, however; see ‘Aucoin on Starz’ side-bar below.) But after finally extracting themselves from the label, Starz realised they had a bigger problem still. Ranno: “The climate was so bad, nobody was signing hard rock bands.”

Smith’s actress wife had relocated to California, which meant the principal members of the band were based on separate coasts.

After a year-long hiatus, Ranno, Smith, Dubé, Davis and a returning Harkin regrouped for a tour, but it didn’t last.

“The music business is a war of attrition where he who lasts the longest wins,” Dubé sums up. “What we should’ve done was take another breather and stay true to our vision. Instead, Starz imploded [in 1980] and that was it. Another rotting carcass on the bone-heap of rock dreams.”

Ranno and Smith stayed together in The Hellcats, who did pick up a deal. Signed to the Atlantic offshoot Radio Records, they released an eponymously titled mini-album in 1982. Then, just five weeks later, Radio Records went bankrupt. It took 10 years to issue an independent, full-length debut (also self-titled, on King Klassic Records), which featured Brendan Harkin but did not include Michael Lee Smith.

The 1989 live double album Live In Action kept the Starz name alive, and a new generation of rock heroes began mentioning them in interviews. In one of his earliest groups, Jon Bon Jovi had apparently encouraged his drummer to paint the Starz logo on the front of his kit. Mötley Crüe’s Nikki Sixx, Tom Keifer of Cinderella and ex-Skid Row frontman Sebastian Bach have all dropped the band’s name, as have members of WASP, Poison and Keel. When Lars Ulrich met Ranno in a Long Island rock club around 1991, the Metallica drummer fell to his knees in awe. “He was hugging my leg saying: ‘You guys don’t know what you mean to me. Coliseum Rock is the coolest album,’” Ranno chuckles.

“But if we were such a big influence on those bands, how about they cover a tune or two?” Dubé muses aloud. “Or would it kill them to maybe allow us to open for them on a tour?”

More than 10 years later, Starz did indeed regroup following interest from a concert promoter in the UK. This was ironic for two reasons: firstly, Starz never performed here the first time around (although, curiously, Smith was flown in to watch a Starz-sponsored Formula 3 car in a race at Brand’s Hatch in 1977), and secondly because the offer of the shows evaporated.

“I’d been in complete denial about Starz since the band split up,” Smith admits. “People would ask if I was that guy and I’d tell them absolutely not.

“But the four of us [Sweval had died of Aids in the mid-80s] did some warm-up shows,” Ranno continues, “and we had so much fun that there’s since been around 15 dates.”

One is documented by Sony Records’ recent Live In Cleveland 2004 album, which might even give Starz a second lease of life. This time around it’s strictly for fun. “I’m satisfied with life, and in some ways I’m glad that I didn’t become famous,” Ranno says. “Most celebrities are absolutely insane. Being in the public eye for too long just does that to you.”

“We’re ready to rock and we’ll play as often as possible for whoever wants us,” says Joe X Dubé, who now works as a landscape architect. “A new Starz album is somewhat overdue, don’t you think?”

“Starz were a great band, and Michael Lee Smith was a spectacular writer and performer who could still cut it today,” the band’s former manager, Bill Aucoin, believes. “Unfortunately the head of promotion at Capitol didn’t believe that their songs would cut it on radio. Because of that, I don’t believe he put in his full effort. After four albums the label said they wouldn’t go any further.”

Aucoin and Starz also split when the band left Capitol, over 25 years ago. So he’s disappointed to learn that it still rankles with guitarist Richie Ranno that the band were forced to produce their third album Attention Shoppers! themselves.

“A few of the band are bitter,” agrees Aucoin, who now manages Lordi, the Finnish monster rockers who won last year’s Eurovision Song Contest. “But where would the budget [for a producer] have come from? By that point Starz was pretty much over anyway. Over half a million dollars had been spent on their show and trying to make them happen – and it wasn’t the record company’s money, it was mine.”