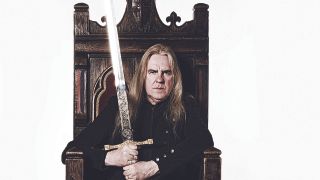 “Quite a few times, actually. Mostly for non-payment of fines. But I did spend a couple of nights in jail in Barnsley around 1971. That was because myself and a few mates were living together in one house. We hadn’t paid the rent, and left the place in a mess. I was playing bass at the time in a band, and the police turned up at a gig to arrest me. Nobody could bail me out, so that’s why I ended up in jail.”

WHAT’S BEEN YOUR MOST EXTRAVAGANT PURCHASE?

“A Ferrari. It was around 1982, 1983. I had a Porsche for a while, but got bored with it and traded it in for the Ferrari. The problem was that I was too tall to sit comfortably in the driver’s seat. So I sold it after a week.”

WHAT’S THE WORST INJURY YOU’VE HAD?

“That was in a carpet factory. I accidentally chopped off the end of my finger in a machine that cut the pile on a carpet with a very sharp blade. It was incredibly painful, and there was blood everywhere.”

WHEN WAS THE LAST TIME YOU WERE STARSTRUCK?

“It’d have to be meeting a movie star. I’ve met quite a few famous ones. The one that sticks out would be Jack Black. It was at Download in 2012 – he was there with Tenacious D and Saxon were also on the bill. I’d watched School Of Rock with my kids quite a few times, so meeting him was special.”

WHEN WAS THE LAST TIME YOU GOT IN A FIGHT?

“That was 10 or 15 years back. It was with [Saxon guitarist] Paul Quinn. He had a tantrum and kicked his Marshall gear over onstage. I had a verbal go at him for being a prat. He had a go back, then I punched him. He hit me back, and before we knew it, we were rolling around on the floor. But it was all done in the spirit of brotherly love!”

DO YOU HAVE ANY PHOBIAS?

“I don’t like rats. I remember me and a girlfriend once had a place, and there were rats everywhere. I really didn’t like that at all. But it’s not as if I have a deep-rooted fear of them. I can watch programmes on TV or films with rats in them. I just don’t like them in the flesh.”

“Red wine. In particular, Italian red wine. But any sort will normally do. Right now, we’re on tour in the States, so I stick to Californian red wine. I don’t really like beer, so I hardly ever drink it. The rest of the guys in the band love their beer, so when they have a drinking session, I’m on the wine.”

WHAT’S THE WORST DECISION YOU’VE MADE WHILE DRUNK?

“That’ll be the time when I visited a friend in hospital. I ran towards some glass doors, but what I hadn’t noticed was that they were locked. So I went straight through them, and cut my hand very badly. At least I was in the right place for immediate treatment. But the hospital staff weren’t amused.”

WHAT’s THE WEIRDEST GIFT A FAN HAS EVER GIVEN YOU?

“A fan in Japan once tried to give me a dog. It was giftwrapped as well. Obviously, I couldn’t accept it, and gave the dog back. There have been a lot of odd items given to me over the years. The strangest is when people come up with photos of themselves with me from years ago. Usually, they’re out of focus or badly framed. I’m not sure why they keep them.”

DO YOU HOLD GRUDGES AGAINST ANY OF YOUR EX-BANDMATES?

“I never hold grudges like that. When I fire them, that’s the end of the matter for me. They might harbour bad feelings about me, but I move on very quickly. Holding grudges achieves nothing.”

SAXON’S DALLAS 1PM WAS WRITTEN ABOUT THE ASSASSINATION OF PRESIDENT KENNEDY. WHERE WERE YOU WHEN YOU HEARD THE NEWS?

“I was at home, following it on TV. I was 12 at the time, but captivated as the events unfolded. Even at that age, I realised this was momentous; history was happening right in front of me. I’ve read a lot about the assassination since, and I really don’t think it was the work of one gunman. I don’t normally put any store by conspiracy theories, but in this case, I think there’s a lot of truth in there.”

WHAT DO YOU WANT WRITTEN ON YOUR TOMBSTONE?

“I really haven’t given it much thought. Can I steal Spike Milligan’s one: ‘I told you I was ill’? Or I’d have something simple, like ‘Born to rock’n’roll.’”