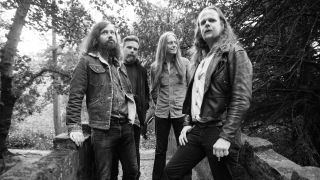 The platters that matter, shatter, splatter and clatter are here to batter.

Gentlemans Pistols - The Searcher Frontman Jason Atkinson used to be in UK hardcore group Voorhees. Guitarist Bill Steer also plays in Carcass. As Gentlemans Pistols they’re playing melodic classic rock like this. ‘70s flavours of The Who and Thin Lizzy, hard-rocking yet jaunty skip in it’s step. It’s certainly a departure from spilling blood or reeking of putrefaction.

Shinedown - State Of My Head “We will always be ‘rock’n’roll’ to the bone,” says Shinedown mainman Brent Smith, “but this song is a prime example of how we refused to limit ourselves on this album”. Built round a drum track, State Of My Head is a sleek piece of driving pop-metal, which will surely become the band’s 20th consecutive Active Rock Airplay chart-topper. Because you can’t stop the rock, as christian metallers Stryper so accurately surmised back in 1991.

The Struts - Could Have Been Me Hurtling into the party like a glitzy great breath of fresh air, The Struts are the most fun thing to come out of Derby in years. Mixing Freddie Mercury, Foxy Shazam and early Darkness touches, it’s rock’n’roll to sing and dance to – without elegance or inhibition.

Archie & The Bunkers - I’m Not Really Sure What I’m Gonna Do Forging ahead with their own genre, Hi-Fi Organ Punk - hmm, not quite as dramatic-sounding as ‘black metal’ - this snotty Ohio sibling duo are a half Damned-half Animals rock’n’roll mongrel. Sixteen-year-old singer/frontman Emmett could be a Jack White in-the-making. Watch this sports-jacketed, tapered-trousered space.

Marvel - Love Machine Sweden’s premiere mask-wearing heroes of rock are back with a cover of the W.A.S.P classic. They tell us it’s a homage to their drummer, The Vicar (a.k.a. The Ambassador), who’s apparently something of a hit with the ladyfolk inhabitants of Five Smell City, the band’s hometown. Great song, great cover, great video.

Earthside - Mob Mentality feat. Lajon Witherspoon & MSSO New Haven’s finest cinematic rockers Earthside have pulled out all the stops as they build up to the release of their debut album. This 10-minute epic features Sevendust’s Lajon Witherspoon, the Moscow Studio Symphony Orchestra, a pair a ballet dancers, several unicorns, a herd of wildebeest, and a hot air balloon in the shape of the Millennium Falcon. Actually, those last three aren’t true at all, but it’s still undeniably spectacular.

Legendary Shack Shakers - Mud Back in the early part of the last century, trains would ferry passengers from Kentucky’s dry counties (where booze was banned), to the wet counties (where booze was invariably a problem). Mud, a rattlin’ two and a half-minutes of primordial bluegrass-blues-punk, celebrates those heady days, and the characters who rode the so-called Whiskey Dick.