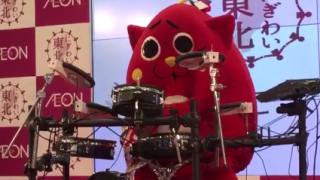 Ask anyone with half a brain and they will agree with you that metal is great. Go on, ask the person next to you.

See? They bloody love it.

And this is probably the reason the below video exists. The adorable Japanese entity known as Nyango Star is seen at what we assume is a convention centre or shopping mall jamming out some blast beats. But he’s not just making it up on the spot like some kind of anime drum clinic, he’s playing along to the song Anpanman’s March, aka the theme for popular ‘90s Japanese children’s TV show Soreike! Anpanman.

Not bad, huh? And we’re not the only ones, at the time of writing, the video has been retweeted almost 90,000 times – slightly more than your pithy comment about Suicide Silence.

It turns out that the tubthumping plushie has something of a following on YouTube, with over 1 million views on its videos. We’re not sure who or what it is, but they have something of a cult following in Japan.

Oh, and they can play Babymetal because of course they can.

The top 10 most metal anime