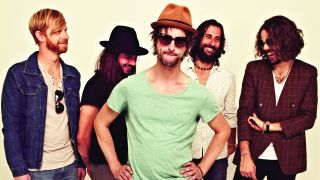 The Temperance Movement made quite an entrance with their eponymous 2013 debut, their fiery blend of blues-drenched rock’n’roll managing to sound like several of your favourite bands all at once. Recorded in just four days, that album crackled with vitality and quickly established them as ones to watch. Since then, the stages and audiences have got steadily bigger and they’ve gained the attention of rock royalty. We caught up with frontman Phil Campbell and drummer Damon Wilson on their recent UK tour to talk about writing a follow-up record while touring, meeting Mick and Keef, and the meaning of the white bear…

It’s been a busy time since your 2013 debut – did it feel like a natural point to make this record?

Phil: We started making this album in 2014. The plan was to have it out in September, but then everything changed because we went over to America and they wanted to hold back and let the first record settle in over there and then follow it up. So it feels like a long time in the UK, because America dictated that it wouldn’t be released here until now. Though I think that’s been good for the material as we’ve already been playing some of it live.

So it was largely written on the road?

Phil: We did write it on the road, but not in America. We were on tour in Europe 2013⁄14 which was when it started to come together.

Damon: We basically did a lot of stuff in soundchecks and from that collated a ton of ideas. So when we got home there was a time when just the band would do short sessions and develop those ideas, very spontaneous stuff that would be sent to Phil. Very different to how the first record was made. Those jams happened in big spaces, in soundchecks, which has never happened before.

Phil: The song A Pleasant Peace I Feel was a new creative freedom borne of being on the road, because we had to create it under those circumstances.

You recently opened for the Stones – what did you take from the experience?

Damon: They were very generous with their time. Keith, who can sometimes come across a little flippant, told Paul [Sayer, guitar] ‘just keep it going, man’ – that’s clearly been their approach! It was part of a huge learning curve for us.

Phil: It’s incredible to get any sort of time with people that are so famous, so we were over the moon with the limited time we had in their company. Although it was a brief meeting, Mick was keen to relate to us, because once upon a time he was us. I love the Stones. When I first heard Exile On Main St, I realised why everybody loves them, they realised this worked and have kept it going ever since. And apart from anything else, the stage size is ridiculous!

What part does the blues play in your music?

Phil: We never sat down and decided to be a blues band, partly because I don’t really understand how that would work. Blues is traditionally folk music. Grooves that were stamped out on front porches, which may end up as the basis for a Rolling Stones song. But the nature of blues being associated with sadness and pain by its creators, this is not who we are – we may have the some of the bluesy grooves, but I don’t think we’re harking back to that time. We have more in common with the bands that made rock music out of it. Essentially what we’re talking about here is pop songs. You can talk about the blues all you like, but bands such as Led Zeppelin wrote pop songs from a blues structure, as did the Stones, until it was their own form.

There are some very different textures on your new record, White Bear.

Phil: Luke [Potashnik, guitarist, who has since left the band] was very insistent that we change track a bit. We essentially started to make different sounds that excited us.

Damon: We wanted to defy expectations. Really for our own sanity rather than to make a point. Just to introduce some of those other elements that we have – I think a lot of people after listening to the first album probably think they know what we listen to and what we love, but it’s much wider than that. That’s not to say we don’t love Free, The Faces, Creedence et al, but we also love The Beastie Boys and Nirvana and Tame Impala.

White Bear is something of an oblique album title. How does that relate to the music?

Phil: It was the name of a psychological study done into thought suppression, the example being try not to think of a white bear. I think we just related that concept with our obsession with this record, getting it done, getting it right and getting it out. So it was like trying not to think about the album!

The album finishes on a downbeat note. Was that always the intention?

Phil: I think we all wanted I Hope I’m Not Losing My Mind to be the closing track, in contrast to most of the record being pretty up. It was sung and delivered a bit like Lou Reed. It reflects a sadder element of the success – we’ve all had something to deal with during the course of the band working so well. So the song is “I hope I don’t lose what’s most important to me, even though this is great and I’ve just met Keith Richards!” It’s an important sentiment for everyone, I think.

White Bear is out now on Earache. Visit thetemperancemovement.com for info.