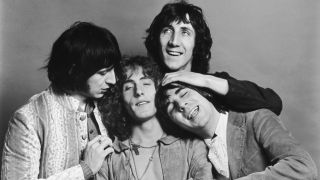 Many of the basics of rock began with the Who: the emphatic clang of Pete Townshend’s guitar, the ardent histrionics of singer Roger Daltrey, the dexterity of John Entwistle’s bass playing, the exuberant pummelling of madcap drummer Keith Moon. Also as pioneers of longer-form musical ideas from 1966, The Who massively expanded the lexicon of the music.

While Tommy remains The Who’s archetypal concept album, their greatest achievement, Who’s Next, stems from Townshend’s failure to top that idea. He sketched out Lifehouse, a project so complex it made the fractured narrative of Tommy seem as straightforward as their song I Can’t Explain, but finishing Lifehouse proved beyond the limits of his confidence – and the band’s patience (it was eventually completed in its intended form in 1999). But at the time, The Who were left with a batch of extraordinary songs which they captured in a studio with unprecedented clarity and energy.

From the mid-70s onwards, a disenchanted Townshend suffered an unfortunate tendency to publicly disparage his abilities and achievements and also those of the group. The Who initially survived his sour attitude, and even the death of Keith Moon in 1978, replacing this singular drummer with the able yet clearly unsuitable Kenney Jones (ex-Small Faces/Faces), but they eventually disbanded in 1982.

Subsequently there was little activity (the odd bad-tempered reunion such as at Live Aid) until 1989, when they regrouped as an expanded touring unit and worked intermittently. But it wasn’t until the late 90s, when they reconstituted themselves as a compact five-piece with long-term keyboardist John ‘Rabbit’ Bundrick and Moon disciple Zak ‘Son Of Ringo’ Starkey on drums that they began to build the kind of momentum needed to overcome the mental hurdle of recording again.

Those aspirations suffered a massive setback with the death of John Entwistle in June 2002, immediately prior to The Who embarking on a major US tour. New material eventually emerged on 2004’s Then And Now compilation in the form of two impressive new tracks that bode well for the planned release of a new album, which finally emerged in 2006 (Endless Wire). Which at least ensured that 1982’s dreadful It’s Hard is not remembered as being The Who’s final bequeathal.

The dazzling songs on Who’s Next fortuitously coincided with vastly improved recording techniques and the blossoming of the entire group’s various talents.

Despite being somewhat experimental, the use of synthesisers on Won’t Get Fooled Again is anything but gimmicky, and complements the raw fury of the band’s delivery so well it may never have been bettered in the context of a rock record. And every other track – from Baba O’Riley to Entwistle’s My Wife – is genuinely outstanding.

Who’s Next truly is one of the definitive, timeless albums in the history of rock music.

The prototype rock (and indeed punk) album, My Generation finds the young but gifted group roaring through one of the most consistent albums of the time with the frantic exuberance and instrumental vehemence of the pilled-up Mod yobs they were.

Daltrey’s voice is raw but engaging, and originals like Out In The Street take their finger-clicking Detroit soul influences at pace and plant them firmly on the scuzzy pavements of Shepherd’s Bush. Even the comparatively reflective The Kids Are Alright crackles with the passion and urgency of the teenage trauma it details. Entire books could be written about the celebrated title track.

SUPERIOR The Who Sell Out Track, 1967

Their lovably sarcastic third album got the group back on track with a diverse collection of songs so at variance with their debut only two years previously it could be by a different band. It somehow simultaneously sends up the inanity of pop radio and the newly emergent underground rock elite terrified of ‘commercialism’ despite expensive Carnaby Street togs and other such trappings.

With its fake radio ads, jingles, crisp irony and provocative title, The Who Sell Out still stands up today as an amusing, inventive and thoroughly British kind of rock record. It’s often overlooked because of more feted aspects of The Who’s career, but in terms of imagination and achievement, this 38-year-old artefact still wipes the floor with most current and comparatively homogenised UK bands.

Even the very best live albums are rarely worth over-long consideration within the context of a Buyer’s Guide like this one, but Live At Leeds is one such rarity. It finds all members of the group – fresh from a formative US jaunt – on riveting, almost telepathic form, and Daltrey outstripping even his improving performances on Tommy, let alone on the earlier albums.

Regarded as a failure by its chief architect Pete Townshend for failing to lay The Who’s illustrious past to rest, this dense, semi-autobiographical and self-mythologising work nevertheless contains many of Townshend’s best songs and some of his most intriguing lyrical and musical notions.

Always in the shadow of Tommy, it is in fact superior to what is often thought of as Townshend’s magnum opus. Although it was received poorly at the time and ushered in an era of disillusionment which Townshend would fail to shake off for the rest of the group’s original run, the album’s ground-breaking challenge to the then still-pervasive view of rock as eternally youth-centric is one that every musician over 30 should be eternally grateful for. The Real Me, 5:15 and Doctor Jimmy are among the best songs Townshend has ever written.

With its Overture, recurring motifs and fuzzy allusions to spiritual salvation, it became a template for lesser-able groups determined to dress up their half-baked ideas in a then fashionable swathe of portentousness.

While this bold but flawed work is now better experienced via the expanded version of Live At Leeds, and Townshend’s penchant for repeated musical themes was more thoroughly accomplished on Quadrophenia, Tommy remains a significant and hugely influential album.

The Who pulled themselves out of their mid-70s malaise with a strong set of songs and a sense of renewed optimism and vigour, more positively exploring now-familiar themes of growing older, although one of Townshend’s lyrical eyebrows remains arched.

Things aren’t helped by the muddy production, when most of the material is crying out for tougher realisation. Keith Moon had temporarily pulled himself out of a drunken stupor to give a powerful performance, but too often the force of his contribution is buried in the mix. That said, the title track, Sister Disco and Entwistle’s humorous sci-fi excursion 905 are particular highlights on a very consistent album.

A fall-out with the renowned Shel Talmy meant his vibrant production skills couldn’t be reapplied after the debut, so Who co-manager/Svengali figure Kit Lambert twiddled the knobs ineffectually on 1966’s A Quick One and for the rest of the decade. More of an ideas man, Lambert hobbles on even the stronger tracks, but he deserves credit for encouraging Townshend to put together the music-hall-style suite A Quick One While He’s Away on an otherwise directionless record. The Who By Numbers, from 75, finds Townshend’s mood in a post-Quadrophenia rut, but its melancholic honesty has aged rather well, whereas the aptly-titled Odds And Sods is a non-essential rarities round-up. Kenney Jones was a stylistically inappropriate drummer for The Who, as 1981’s Face Dances demonstrates. His measured, precise technique, combined with a glossy production, emasculates another creditable collection. The Who were of course also an excellent singles band, and of the many albums rounding up the non-album hits, 2002’s double The Ultimate Collection is the most comprehensive, and indeed a useful primer for the Who beginner.

The Who’s recording career ground to a halt with this, the only irredeemable studio record in their back catalogue. A fresh-from-rehab Townshend caved in to his bandmates’ requests for ‘Who-type songs’ and came up with the most passionless facsimiles imaginable. That Townshend’s solo album from the same year, All The Best Cowboys Have Chinese Eyes, contained much material that could have worked wonderfully for The Who – had the others had more imagination – makes it even worse. An alternative title could have been The Real Who By Numbers.

Pete Townshend spent a good chunk of the 70s, 80s and 90s whingeing about the drawbacks of his privileged position and the Who’s exalted status. Now that he’s apparently ‘over himself’, how about giving something back?

Maybe he could apologise for his ingratitude by giving a nod to bands who would have loved a crack at the big time but never really made it? Imagine Daltrey, Townshend and co. blazing through That Petrol Emotion’s lost power-pop classic Big Decision or Stray’s Jericho? Diamond Head, Amundsen, Witchfynde, The Creation and more could also do with the royalties and belated recognition.

This was first published in Classic Rock issue 79.