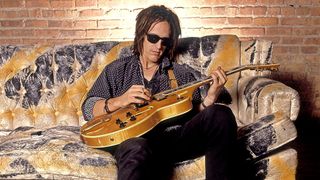 Whatever happens, the music Slash and Axl created together all those years ago is what defines them even now. The same is true of the three other original members of Guns N’ Roses that recorded the epochal, 30-million-selling debut album Appetite For Destruction in 1987. Likewise, Matt Sorum, who replaced the drug-addicted Adler for 1991’s twin Use Your Illusion double albums, and Stradlin’s successor Gilby Clarke, who was in GN’R during the marathon two-and-half-year Illusion tour.

There is, however, one respect in which Axl is unique among them. He is the sole constant in the band, and GN’R has been his one creative outlet, save for occasional guest appearances on records by friends such as the Eagles’ Don Henley and former Skid Row singer Sebastian Bach.

In contrast, every other star of GN’R’s imperial phase from 1987 to 1993 has made music outside of the band, during and after. There were albums by Slash, McKagan and Clarke while they were still in the band. Later there was Velvet Revolver, the supergroup featuring Slash, McKagan, Sorum and former Stone Temple Pilots singer Scott Weiland. There were the Slash albums, Duff McKagan’s Loaded, and Izzy Stradlin’s albums as a solo artist. For Axl Rose, there is only Guns N’ Roses; for Slash and Izzy and the rest, there is so much more.

The best record that Slash has made outside of Guns N’ Roses was nominally a solo album, but with a stellar cast of special guests including Ozzy Osbourne, Lemmy, Dave Grohl and old GN’R bandmates Izzy and Duff.

The format – star guitarist plus various big-name singers – was loosely inspired by Carlos Santana’s 1999 hit Supernatural. But where Santana covered a range of styles on that album, Slash, on his, just rocked out.

Most significant of all was the contribution of singer Myles Kennedy on the standouts Back From Cali and Starlight. Kennedy would go on to co-star on Slash’s subsequent albums Apocalyptic Love and World On Fire.View Deal

To walk out of GN’R in 1991, when they were the biggest band in the world, Izzy Stradlin had balls. Having quit drugs and booze, he was tired of the circus around Axl and GN’R, and wanted to make music on his own terms, in the style of his hero Keith Richards.

Backed by The Ju Ju Hounds – Georgia Satellites guitarist Rick Richards, bassist Jimmy Ashhurst and drummer Charlie Quintana – Stradlin made one of the coolest rock’n’roll albums of the 90s, with brilliant, low-key tracks such as Shuffle It All and Come On Now Inside, plus a cool cover of reggae classic Pressure Drop.

Featuring three veterans of The Most Dangerous Band In The World, plus a singer as volatile as Axl Rose, this supergroup was not built for the long haul. It was, however, great while it lasted.

If there’s a forgotten man in the story of Guns N’ Roses, it’s Gilby Clarke. During his three-year stint as rhythm guitarist, he played on the ’93 covers album The Spaghetti Incident? He was still in GN’R when this solo album was released in ’94. But not for long…

Although Axl and every other member of the band appeared on Pawnshop Guitars, the singer fired Clarke before that year was out. With Axl Rose, so it goes.

For all that, this is a fine record, with crunching hard rock in Cure Me… Or Kill Me, and the Beatles-referencing power-pop of Black. Axl sings on a version of the Stones’ Dead Flowers, the cynicism in the song entirely apt.View Deal

It was an album borne out of frustration, and comprised of songs that Slash had written for Guns and then had rejected by Axl. In such circumstances, the debut album by Slash’s Snakepit could have been a disaster. Instead it was a powerful, guitar-heavy record, and for Slash, a signpost to a future beyond GN’R.

For Slash, it was a validation. A year later he quit GN’R.View Deal

Duff McKagan, Believe In Me Geffen, 1993

Given the state Duff McKagan was in during the early 90s – drinking, by his own estimation, a gallon of vodka a day – it’s amazing he made a solo album at all, let alone a good one. And it was a record almost entirely of his own making, save for guest spots from Slash, Jeff Beck, Lenny Kravitz and others.

The album had its flaws. The rap-rock of Fuck You was a drunken joke too far. But on the best track, Man In The Meadow, McKagan dug deep in a lament for his dead friend Todd Crew, of fellow LA band Jetboy. Behind the caricature of McKagan – the pissed-up punk rocker – there was a whole lot more.View Deal

The music was never a problem with Velvet Revolver – second album Libertad was almost as good as the first. The problems were entirely personal.

There were some great songs on Libertad – Let It Roll, She Builds Quick Machines and a brilliant cover of ELO’s Can’t Get It Out Of My Head. But when it failed to match the success of Contraband, tensions between Scott Weiland and the rest of the group escalated rapidly. Weiland jumped before he was pushed, quitting on April 1, 2008.

Following the singer’s death in December 2015, Slash posted a photo of them together via Instagram, with the message: “Sad day. RIP Scott Weiland.”View Deal

When McKagan formed Loaded in 1999, it was to promote his second solo album, Beautiful Disease. As it turned out, that album was never released, due to record company politics. But the band has lived on, albeit on an irregular basis – revived whenever McKagan has time.

His involvement in Velvet Revolver meant there was an eight-year gap between Loaded’s debut Dark Days and follow-up Sick. On this album the band had a new line-up, a newly expanded name – the more sellable Duff McKagan’s Loaded – and a set of ballsy hard rock songs, including a title track reminiscent of Hanoi Rocks.View Deal

In the 25 years since he quit Guns N’ Roses, Izzy Stradlin has kept a low profile. He has, on occasion, jammed with GN’R; in 2012 he joined the band on stage in London and Las Vegas. Other than that he’s stayed out of the spotlight. While he’s never stopped making records, he goes about his business quietly.

Of the 11 albums he’s made in those 25 years, River is his second-best after his solo debut Izzy Stradlin And The Ju Ju Hounds. Pure, no-frills rock’n’roll, it has echoes of the Stones running from the swaggering Jump In Now through to the woozy honky‑tonk ballad Feelin’ Alright. How Guns N’ Roses have missed him.View Deal

Adler, Back From The Dead New Ocean Media, 2012

Of the five members of GN’R’s classic line-up, Steven Adler is the luckiest to still be alive. By his own count, he has survived “twenty-eight overdoses, three botched suicides, two heart attacks and a debilitating stroke”. The album he recorded with his eponymous band in 2012 was aptly named. He told Classic Rock: “There’s nothing greater than a comeback.” Problem was, the album sucked.

In his prime, Adler was the best drummer Guns N’ Roses ever had. But this band he had was no GN’R. With singer Jacob Bunton screeching horribly, Adler sounded like a bad Ratt tribute act. Inevitably, the album sank without trace.View Deal