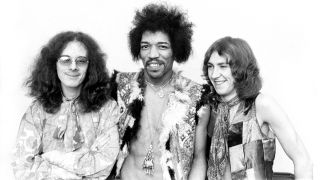 I was on the Entertainments Committee at Imperial College in West London who booked Jimi in May 1967. We booked a lot of great groups, like Steamhammer, Spooky Tooth, America – and Jimi Hendrix. It was a sort of ball: you had three or four groups playing in different parts of the building. We paid a thousand pounds for Jimi to come that night, and there were a thousand people in that hall. Tickets were more than a pound, so the Imperial College Union made a profit.

This was before [May’s band]Smile. It was the days of my original band, 1984. We were playing in a room at the bottom, and Jimi was on in the main hall so, yes, in a sense, we supported him. I remember, we were stood in the little corridor backstage between the stage and Jimi’s dressing room – which was actually the jazz club room where Roger Taylor and I first played together, strangely enough. Just kind of clumped outside waiting for him. Jimi came out of the dressing room and said: ‘Where’s the stage, man?’ We just pointed [starstruck]. He was the coolest guy on earth. No doubt about it.

We got fairly close to the front. But you didn’t have to be at the front, actually. It was all-enveloping. He started Foxy Lady, just widdling his finger on the string very, very, very slowly, building up a feedback note. He’d just smile and laugh and move it around. He was wicked. Always that twinkle in his eye. It took a long time – then suddenly he was ready, and he was at full volume, and he just rolled into that fantastic riff.

My memory, really, is of being overwhelmed. It was slightly scary. I thought I could play guitar at that time. I thought I was okay on guitar. But when you saw Hendrix, you just really, really wanted to give up – or try a lot harder. I looked at his equipment, and looked at him, and thought: ‘Well, he’s just a man, and that’s just a guitar, and those are just amps.’ But when he started up it was like an earthquake. That doesn’t even describe it. It was like a cross between an earthquake, an orchestra and a whirlwind of sound. And it was apparently magical.

But certainly, I can tell you, nobody was singing along. People didn’t sing along in those days. It just wasn’t done. It wasn’t cool, in a rock show, to sing along to Purple Haze. People had a lot more inhibitions, I think.

We played Purple Haze. that night as a kind of tribute to Jimi, and it’s rumoured that he came down and saw me playing it. People have told me that he came in, stood at the back and watched. I had no idea.”