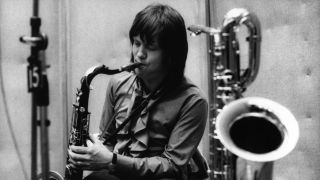 For the last 45 years, Bobby Keys was the closest the Rolling Stones got to sporting a sixth member; a larger-than-life force of nature blessed with supernatural talent when he picked up his tenor sax and unleashed the unholy force-ten skronk which elevated countless rock classics. His rip-roaring sense of fun and contagious Texan humour lit up every room he entered and made him Keith Richards’ close buddy for years.

To just sum Keys up as the guy who blew the sax solo on Brown Sugar is something of an injustice when looking at a career which started with touring in Dick Clark’s Caravan Of Stars backing the likes of Little Eva, the Imperials and Major Lance and went on to include putting a rocket under hundreds of recordings, many of them landmarks.

Born near Lubbock, Texas on December 18, 1943 (same day as Richards and up the road from Buddy Holly), Keys attributed his roaring tone to main influence King Curtis, attacking his saxophone like a guitarist would a solo. He recently claimed to have peeled off the searing solo on Dion’s The Wanderer after stumbling into its 1961 recording session and first met the Stones in 1964 at the San Antonio Teen Fair when touring with singer Bobby Vee.

Keys next ran into the the band when they were in LA recording Let it Bleed and he was in the studio next door working with Delaney and Bonnie. Invited by Mick Jagger to play on Live With Me, he let fly and was in, touring with the Stones and adding his roaring sizzle to the golden 70s run of Sticky Fingers, Exile On Main Street, Goats Head Soup and It’s Only Rock ‘N’ Roll. He recalled Brown Sugar as a last minute idea from Jagger and producer Jimmy Miller to replace Mick Taylor’s guitar solo with the lascivious solo he produced in one take, recalling “I just really shut my eyes and play. I play more rhythmically than I do a lot of notes. I pull a lot of the stuff that I play off the rhythm tracks, and Keith Richards has been one of the main contributors to my inspirational playing.”

Keys became Keith’s closest partner-in-mischief on the road, caught with the guitarist throwing a TV off a hotel balcony in the unreleased Cocksucker Blues movie of the 1972 US tour, although he also developed a heroin habit before having to take a break from the band after missing shows on the 1973 tour. He could count himself as one of the few whose antics proved too wild for the Stones. In Life, Richards recalled finding him frolicking with a French girl in a bath full of Dom Perignon.

This writer encountered Bobby several times over the years, remembering him as the funniest man on the planet, particularly one night in the bar of Marylebone’s Landmark Hotel after a 1995 London secret gig where he’d just got hold of a video camera and hilariously charmed Annie Nightingale and Chrissie Hynde into being filmed with Foghorn Leghorn bluster.

After playing on Ronnie Wood’s 70s solo albums and touring with the New Barbarians with Richards in 1979, Keys remained Keith’s close ally during the fractious “World War Three” period which nearly finished the band in the 80s, playing on his Talk Is Cheap solo album and with the X-pensive Winos. He rejoined the Stones for 1989’s Steel Wheels tour after Keith snuck him into a rehearsal, staying on as an essential link with their golden age until his last show with the band at Denmark’s Roskilde Festival on July 3 when his battle with cirrhosis caused him to cancel his remaining dates.

Keys also played with former Beatles, including George Harrison’s All Things Must Pass, two Ringo Starr albums and Plastic Ono Band hits such as Power To The People before John Lennon albums including Some Time In New York City, Rock And Roll and Walls And Bridges. He was a lively element in Lennon’s ‘Lost Weekend’ in LA between 1973-75.

After he died at home in Franklin, Tennessee on December 2, the band he booted heavenwards at every show commented, “The Rolling Stones are devastated by the loss of their very dear friend and legendary saxophone player, Bobby Keys. Bobby made a unique musical contribution to the band since the 1960s. He will be greatly missed.”

Meanwhile, his old running buddy Keith declared, “I have lost the largest pal in the world and I can’t express the sense of sadness I feel, although Bobby would tell me to cheer up.”

Keith, more than anyone, knew what Bobby meant when he roared, “I come strictly from feeling, and that feeling comes from rock ‘n’ roll.”