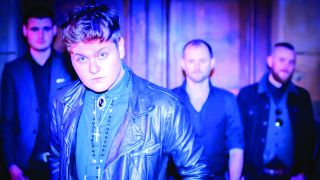 There’s no better music than blues through which to express your feelings when your woman/man/dirty-low-down-hound-dog done you wrong. That’s impressively demonstrated by the lead track from Broken Witt Rebels’ Georgia Pine EP.

Low employs a crunching Zeppelin-esque guitar riff to illustrate the crushing pain and panic of heartbreak, as singer Danny Core evokes several shades of howling emptiness in a blood-curdling vocal. The video even sees Danny drowning his sorrows in a dingy boozer as his band soundtracks his descent into unconsciousness, and you can well imagine this song being belted out by recently dumped lovers as they are carried out of the bar to sleep it off.

But there is more to this Birmingham four-piece’s sound than that heavyweight punch of a tune. On the Stonesy groove of Suzie there’s a southern soul seasoning to their emotionally charged brand of blues rock, while Guns’ anthemic urgency resembles The Stereophonics covering The Black Crowes. All of which makes for a startlingly mature sound for a bunch of lads in their mid-twenties.

“I grew up listening to Aretha Franklin and Muddy Waters, as well as the later Britpop stuff that was around when I was a kid, and big local bands such as Ocean Colour Scene,” Danny Core says. “But I was never in bands at school. Then one day when I was 16 my brother bought an old guitar. He never played it so I picked it up, got a couple of second hand tab books of Oasis songs, taught myself to play and then started writing songs.”

After getting “sick of staring at the four walls”, he hooked up with bass-playing friend Luke Davis and guitarist James Tranter, and Broken Witt Rebels began gigging locally, with drummer James Dudley completing the line-up.

“We started off with a mod-britpop sound, but then we grew up,” grins Core. “We’re now more soul and blues driven and we’re passionate about really singing for our supper.”

Core is central to the group’s appeal with his charismatic vocal delivery. “I’m still not performing at half my capacity really – I’m constantly learning my trade,” he says. “I’ve grown in confidence and I’ve still got a lot more to give, as has the band as a whole.”

An example of new ground they’ve broken is the most recent song on the EP, Getaway Man, a smouldering semi-acoustic ballad that asserts, ’If you don’t believe in love, I don’t believe in you’. It’s a line that reflects a band that commands devotion to a cause and leaves every drop of emotion on the stage at the end of the night.

“We’ve lost jobs, relationships – everything’s on the line for this band,” Core admits. “We’re not here to make up the numbers or to be part of any scene – we’re here for longevity.”

Georgia Pine EP is out now on www.brokenwittrebels.com.