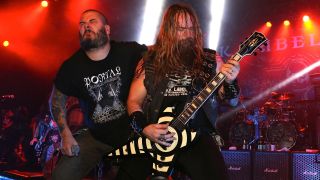 While those in attendance surely had a lovely time, the rest of us had to settle for YouTube videos while repeatedly sighing that we weren’t there. Perhaps unsurprisingly the emergence of this news added fuel to the long standing rumours, or more accurately wishes, that there could be a Pantera reunion on the cards with Zack Wylde filling in for the legendary Dimebag Darrell.

Pantera are in the minority of legendary metal bands that many younger metal fans have never had the chance to see live. The sad and untimely death of Darrell meant it could never really happen. However this hasn’t stopped fans speculating about Anselmo once again joining forces with bassist Rex Brown and drummer Vinnie Paul, while Dimebag’s good friend Zack Wylde pays tribute by picking up his guitar.

Putting aside the issue of any of the much storied bad blood between Pantera members, in many ways the suggestion is a very exciting one. Festivals would no doubt scramble to book them. While there may be those who bemoan repeat bookings of the likes of Metallica and Iron Maiden, as well as those who turn their nose up at newer bands such as Avenged Sevenfold, this would surely be great news for everyone, right? One of the most influential metal bands in history, that haven’t played together in years, belting out the likes of This Love and Walk to a field full of people sounds like a dream come true.

Maybe, but maybe not. We may long for golden days gone by, in the form of nostalgia-filled reunion shows. However sometimes things are best left in the past. Just look at Marilyn Manson’s disastrous Download 2009 performance, a far cry from the Antichrist superstar he once was. That’s not to say a Pantera reunion would be a bad show, but it would be hard to shake the feeling that it isn’t Pantera, not really.

Dimebag played such an important part in that band that a show without him simply wouldn’t be the same. Granted the likes of Thin Lizzy may have reformed without Phil Lynott, and Queen returned to the stage with Adam Lambert filling Freddy Mercury’s shoes, but these are questionable decisions in themselves. I’m sure many fans would argue that Lambert could never compete with such an enigmatic performer as Mercury.

Sure, it sucks for us that weren’t there first time round, but in this instance we should be grateful that the band will forever have their place in history and Dimebag’s legacy lives on as an integral part of that untouched. So, how about instead of pinning our hopes on a semi-Pantera reunion, we just stick on Cowboys From Hell and do a shot of whiskey for Dimebag? It’s what he would have wanted.