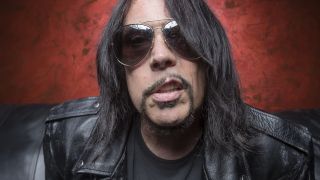 Please don’t hurt me — I come in peace. I’m the least likely person you’ll ever read in Classic Rock: a raver with a ton of acid house 12-inches at home, a flamboyant vein of classic disco in the CD rack and gigabytes of brain-killing repetitive techno on the hard drive.

I laugh at “trog hair”, I never enjoyed a teenage snakebite-and-metal phase — I was listening to The Smiths and Frankie Goes To Hollywood instead — and I run a mile when I hear a guitar solo. I’m the one the Pet Shop Boys (my favourite band, inevitably) sang about: I dance to disco ‘cos I don’t like rock. I can just about put up with the quiet Nirvana songs and, at a push, Enter Sandman. Not disgusted enough yet? In a former life I edited a music magazine, Select, that invented Britpop. So you’ve got me partially to blame for Jarvis Cocker, Liam Gallagher and Blur’s Country House too.

And yet, and yet… Even a stopped clock tells the right time twice a day, and there is one out-and-out rock band that — in spite of all logic and consistency — I do love. They’re not the biggest by far (in fact their dogged refusal to give up in the face of meagre commercial success, their pursuit of their holy mission no matter what, is one of the reasons I like them. Must be an indie thing). They’re not young or hip and they get no associative props from either the art brigade or the fundamentalist metal crew.

But they are totally unique, an heroic campaign and a vocation more than a band, so deep into their own lonely quest that to turn back would be pointless anyway. Monster Magnet are the rock band that makes sense to me. They’re the metal band that gives me a tiny window into understanding how metal feels to you guys — and I like it.

They are one of only two acts that my wife — New York-raised on garage punk and metal — and I can both get on with. (The other one, for reasons too complicated to explain, is Wirral folk satirists Half Man Half Biscuit). I knew Monster Magnet from their one and only genuine hit Space Lord in 1998 and the Powertrip album, which had weird and disturbing things to say about the male mind and the lust for fantasy that seemed totally at odds with the elves-and-resentment menu I expected from hard rock. She took me to see them at the Shepherds Bush Empire and I was sold.

In leather pants with flames up the side, frontman Dave Wyndorf harangued us from a fiery pedestal (actually backlit tissue paper but Wyndorf believed in it, so we did too) as if addressing the final battle for all creation instead of tight audience in a modest theatre. I’d always thought that metal — or stoner rock or sludgecore or whatever it is, don’t ask me, I’m new here — seemed a lot more fun to play than it was to listen to. Here was a band that totally electrified me because they weren’t looking for fun, but for bigger things: apocalyptic self-actualisation, cosmic transcendence, head-exploding pinnacles of ultimate excitement to match acid house’s highest peaks. Those sorts of things.

Also, they — I say “they” but I really mean “he”, Wyndorf, New Jersey native, ex-punk, driving force and sole constant member of Monster Magnet — were self-evidently comic book guys just like me. The more I dug into the Monster Magnet back catalogue, the more I found the psychedelic Silver Age Marvel madness of huckster-scriptwriter Stan Lee and artist-visionary Jack Kirby, the Lennon to Lee’s McCartney, a four-colour seer and shaman, the William Blake of comics.

Marvel characters like MODOK, the Fantastic Four and Ego The Living Planet swarm over MM tracks like the symbolic demons and angels of a hidden — but more truthful — reality. On God Says No’s key track Melt, Wyndorf sings “I was thinking of how the world should have cried/On the day Jack Kirby died” but the song is more than an exercise in name-dropping. It’s a lament for the gulf between Wyndorf’s own drug-fucked lassitude and the brilliant, blazing world that caught both of us before we were teenagers, and will always be just beyond our fingertips.

A few years ago, comics scriptwriter Grant Morrison clocked Wyndorf’s obsession and named an ‘X Men’ mutant after the grunge-era Monster Magnet hit Negasonic Teenage Warhead, to the singer’s delight. He’s just given another nod to a MM album in his DC series ‘Multiversity’, when an extradimensional entity announces himself, for no reason other than extravagant coolness, as “Nix Uotan… SUPERJUDGE!” I envy Wyndorf at moments like these.

So Monster Magnet have become one of my favourite bands, alongside fellow lone-furrow-ploughers like British Sea Power and Half Man Half Biscuit, who sound absolutely nothing like them but share an intuition that if they don’t do this, nobody will. I love the fact that every other Monster Magnet recording sounds like the exultant soundtrack for a galactic dictator’s Nuremberg Rally on some ravaged planet. (You can bet that Thanos has Hallucination Bomb on his Infinity iPod). I love the moronic simplicity of their debut single Tractor, which is basically just four chords hammered into your head — just like a keyboard-stabbing rave tune — while a hysterical Wyndorf declares “I’m driving a tractor on a drug farm.” Why be coy?

I love the star of every Monster Magnet album cover, a throbbing, steaming man-bull-machine creature with exhaust pipes jutting out among its horns, an icon of male rage and the most metal thing that I, an outsider, have ever seen. (In a 1967 Marvel comic of my imagining, Monster Magnet’s Bull God tears Iron Maiden’s Eddie to pieces like a cooked chicken. Art by Jack Kirby, of course.) And I love the fact that as far as I can see Monster Magnet have made precisely one compromise in their three-decade career, when Wyndorf sang “Space Lord, mother mother” and you just know he really meant “Space Lord, motherfucker.”

They have a new record out next week, Milking The Stars, which “re-imagines” most of the songs from last year’s pretty fantastic Last Patrol. The idea is to pretend it’s 1968 and re-do the album’s cosmic diatribes and four-dimensional ballads in the classic psych style. Crawling with spidery Farfisa organs and radiophonic whooshes that resemble a TARDIS having a nervous breakdown, it is an absolute blast, not least on Mindless Ones ‘68 which perfectly summons up Marvel’s master of the mystic arts Dr Strange and the vertiginous alien landscapes of the man who drew him, Steve Ditko. Listen closely and you’ll be ahead of the game when the Benedict Cumberbatch Dr Strange movie comes out in 2017.

Sometimes I find myself wishing that all hard rock sounded like this, so that I could like more of it. But then I glad that it doesn’t. Monster Magnet will never be a Metallica or an AC/DC, and that’s OK. They are something else, something stranger and more magnificent. They’re the unconquerable emperors of a dread dimension that is entirely their own.

_Milking The Stars: A Re-Imagining Of Last Patrol is out on Monday. _