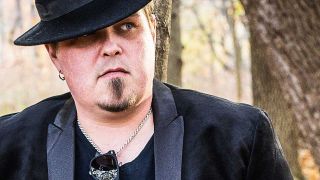 "I grew up around southern rock and country music, but when you get to the heart of it, it’s all blues," Black Stone Cherry frontman Chris Robertson told us in 2016. This might explain the presence of Lynyrd Skynyrd, Mountain and Jimi Hendrix in Chris's list of 10 Records That Changed My Life, but there's a couple of surprises along the way...

Black Stone Cherry's new album Family Tree is out this Friday, and can be ordered now.

"I didn't technically buy it myself, but it was the first album I ever received. I got two records for Christmas: that one, and Jimi Hendrix's The Ultimate Experience. But I opened the Hootie & The Blowfish first, so I gotta say that! Jimi was a bigger influence, though – to the point where I have him tattooed on my arm."

"It's a live record. I remember going through my dad's vinyl, and I pulled that one out just because of the cover. I turned it on, and Crossroader and Mississippi Queen came on and I thought, "Oh My God. This is amazing!"

What's the album you wished you'd made?

"Anything in Hendrix's catalogue. Literally, any of the three studio albums that Jimi put out. As a guitar player, and as a singer who was a guitar player first, there'll never be another Jimi Hendrix. There'll never be anyone close to Jimi Hendrix in my opinion. But as a kid who kinda had to sing, and just wanted to be a guitar player, I listen to those records, and although he wasn't the most technically proficient vocalist, he meant those words. You get the feeling he was trying to convey as much vocally as he was with his guitar. Those records are huge."

What was the first album you had sex to?

It went well. It was with my now-wife. I just on some music and kinda went for it. There was that, and two other heavy records from that time. It might sound like I'm bragging, but I'm not. I was so nervous.

What's the album that reminds you of school?

Rage Against The Machine - Evil Empire

I wasn't in high school went it came out, but I really got into Rage Against The Machine when I was in high school. I was in marching band, and I remember I'd get my walkman, and put the CD in it – this would have been 1998 or 1999 – and put my headphones on. And I'd play along on my drum to the record. People Of The Sun is the song I always wanted to listen to.

If a kid asks you what metal is, what album to you give them?

That's hard, because metal is so diverse. Black Sabbath are the creators, but to me they're like a hard rock band, not a metal band. They're a blues-based hard rock band. If someone asked what metal is, I'd probably hand them Cowboys From Hell, because that was my first metal album.

What's the album no one will believe you own a copy of?

That's tough, because I own a lot of obscure stuff. But I guess a record people wouldn't think of me being into would be Massive Attack's Mezzanine. That record is amazing. The first song, Angel, is never off my phone. If you look at my phone, it's all classic rock — apart from Adele, but everyone knows I'm a huge Adele fan – and then there's Mezzanine. I don't know what it is about that record, but it just does it for me.

What's the album you want to be remembered for?

At this point in our career, I would say Family Tree, because it's the first time we've ever done a record completely on our own. The only thing that was done outside of Black Stone Cherry was the mastering, because mastering engineers are like aliens who do magic with fairy dust. We recorded and produced on our own with the engineer who worked on our debut album, and on the record we made when we were teenagers, Rock N' Roll Tape. John did the artwork, I mixed the record.

What's the album you want played at your funeral?

I don't know about a whole album, but my favourite song of all time is Lynyrd Skynyrd's Tuesday's Gone. You could play that song and I'd be OK with it.

What's the most underrated album?

There's a band called Big Wreck out of Canada. It's a guitar player named Ian Thornley, and I don't know why the world doesn't know him as one of the great singers of an era. There's a record of theirs called Albatross, and it's one of the most underrated records I can think of. It's just world class stuff.

Black Stone Cherry's new album Family Tree is out this Friday, and can be ordered now.