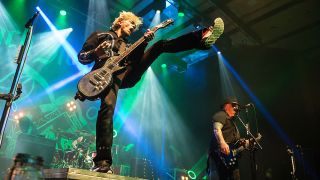 Next month, Black Stone Cherry head out on a potentially explosive UK tour with The Cadillac Three and Monster Truck. As packages go you won't many stronger line-ups this year, so we tracked down BSC frontman Chris Robertson to ask him all about it.

Full dates below. Tickets are on sale now.

So who’s idea was the tour?

We were looking at putting together a package, and we’d thrown around about four or five different bands that we wanted, two of them were The Cadillac Three and Monster Truck. We wanted to do a different kind of tour than what we’d done before; most of our tours have been with modern rock kinda bands."

Yes, your previous arena tours here have been with bands like Shinedown, Halestorm… this is quite a different line-up.

Yeah, but for us especially with the new record we’re going in kind of a, not a ‘new’ direction, just a different vein of what we do - kinda more back to what we started out with on the first couple of albums, it was way more Southern and way more who we were before we had to get with producers and all this stuff.

But we got right back to who we were, and we were like ‘let’s take bands that don’t sound like other bands’ - not one of the three bands on this bill sounds like another band, you couldn’t confuse any of the three of us for anybody else.

How long have you known the Cadillac Three and Monster Truck guys?

Well we've known Jaren [Johnston, The Cadillac Three frontman] since the American Bang days [the earlier incarnation of TC3]. And the first time we got to see Monster Truck was at Download, they were sound-checking right after we did, I remember it rained like crazy that year; it was the first year we did the second stage...

They remind me of Mountain; and the thing is Mountain is like the greatest Southern rock band from the North. I got to meet Leslie West one time, out at the NAMM show, and he yelled for his assistant coz he found out we were from Kentucky, and she’s from Kentucky. And dude, when he yelled for her it sounded like he was singing fucking Never In My Life. He’s like the rock’n’roll Freddie King.

You’ve played big festivals and arenas in the UK a few times now. Have you changed the way you perform much, as you’ve played these bigger shows?

We never play the same setlist twice now. We used to have a setlist for the tour, and we’d occasionally switch out a song. And then around April of this year we went out with Govt Mule, and they completely fucking destroyed us the first night. We went out and thought ‘yeah we kicked ass!’ And then they go out and we’re like ‘nope’...

We played on a bill with The Cadillac Three, maybe a month ago, and we went in we had, like, 10 songs on the list - our shows are about two hours long, so it gets longer, we’ve got six records but we stretch 'em out really long now and we have fun. That way we can play the songs people expect, and the ones we wanna do as well.

Your band has a really strong sense of camaraderie, but as a frontman you're still the main face/voice. What's the best and worst thing about your position?

The worst thing about it is, for me, trying to not say the exact same thing every night. I do better when I just talk and don’t think about it. And then I’ll start stuttering really bad, coz I do that from time to time, and I make fun of myself. I think the best part of it is when you meet somebody, and they come up to you afterwards and go ‘what you said during this song, the lyrics, it meant something to me.’ That’s the fucking pay-off at the end of the day. To me a frontman’s no better than anybody in the band. I’m just one quarter of what’s going on up there. I’m no more special than anybody.

If you had to pick a moment that’s really stuck over the last few years of touring, what would be it?

There’s a couple for me. Download this past year, playing right before Guns N' Roses. It was an ocean of people. I called my wife when we were done, all choked up and emotional… the outer-body thing that people talk about, it happened. It was weird. Another one would have been headlining Ramblin' Man. And then the other one would be the first time we headlined Wembley.

We played the show, I walked straight off, went straight to the dressing room, fell to my knees and literally sobbed. Man, I was like 'I grew up in a house where I had to fucking heat up water in those tubs you get in the hospital to take a bath, and I just got to headline Wembley Arena? It’s too much right now'. So I cried and got really drunk, and it was great.

And [looking further back] starting out on a tour bus is a special thing. I remember the first bus we got on was, like, a ‘93 Eagle that was all fucked up, none of the air-conditioning worked, the only air that worked was the driver’s air conditioning, so we were daisy-chaining fans down the bus, laughing and having the best time in the world. I swear to god we were daisy-chaining those shitty-ass fans. So we leave Glasgow, Kentucky, we got 45 from Glasgow and the son-of-a-bitch broke down.

In the spirit of looking back (a little further back this time…), can you remember the first song you ever played live?

I played Cocaine by Eric Clapton with my dad when I was 13 years old. Yeah, 13 years old and playing a song about cocaine!