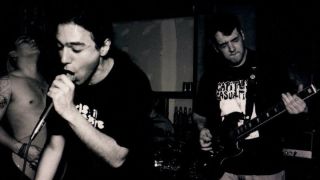 Think of powerviolence nowadays and names like Nails, The Locust and Weekend Nachos immediately spring to mind, but little is said about the East Coast pioneers Black Army Jacket. Their short-lived career spawned just one studio album and a clutch of split EPs, but their full-length 222 is fondly remembered by fans of the ‘90s New York scene. Mashing together their love of grind and hardcore, their sole album was recorded back in 1999 but is now being reissued with two previously unheard tracks. If you’re a fan of hardcore, punk, grindcore, powerviolence or even the music of New York, check out the reissued album that we’re streaming in full below!

To find out what it was like to be a part of Black Army Jacket, we caught up with bassist/vocalist Carlos Ramirez for a quick chat.

What led you to start Black Army Jacket back in the ‘90s?

“Andrew Orlando (guitarist) wanted to start a band in the vein of Napalm Death and the powerviolence scene coming out of California during that period. He had previously played in Milhouse, who were more like the screamo bands on the Gravity Records roster. The mission was to write and record grindy hardcore, even though that wasn’t in vogue yet at home in New York.”

You’re credited with helping innovate the powerviolence movement, how does that make you feel as an artist?

“Well, I’m not sure if that’s a fair statement, but we definitely feel like we were one of the first bands on the East Coast to be in the powerviolence orbit back then. If it weren’t for California-based groups like Spazz, Crossed Out, and No Comment, Black Army Jacket wouldn’t have existed.”

Were you trying to shake things up a bit? What was the band’s aim?

“The band’s aim was to write songs that cut all of the fat out and kept the parts we loved about aggressive hardcore and metal. With that in mind, our songs were short and to the point.”

What bands do you see as carrying the powerviolence torch in 2017?

“I think Weekend Nachos flew the powerviolence flag well for many years. ACxDC obviously had a great run. Of the newer bands, I will say that I love what Sex Prisoner have been doing.”

What is your fondest memory from your days in the band?

“We did a bunch of touring on the West Coast of the US and that was always amazing. We played a ton with Noothgrush and formed close bonds with them. Another great period was when Spazz came out to the East Coast and we played on many of those bills with them. Those were some crazy shows, with the Stalag 13 venue in Philadelphia being a highlight.”

Which Black Army Jacket song are you most proud of?

“I’m biased on this one because I wrote the lyrics and sang lead vocals, but U68 from the 222 album is my all-time favourite Black Army Jacket track. The lyrics are a tribute to the underground American metal acts that inspired me as a kid in the ‘80s, I reference bands like Vio-Lence, Anvil Bitch, and Jag Panzer. U68 was a local television channel in the NYC area that used to have a show called Power Hour where they would play all kinds of obscure metal videos. It was a life-changer for me.”

“I haven’t in years, but I’m happy with the results. It’s nice to see people still discovering it all these years later.”

Do you regret breaking up?

“The only thing I regret is not making a second album; we were working on some really solid material towards the end of the band. There was a song called Terrorscope, that was a ripper. I also remember a song called Adriana that had some interesting riffs going on.”

Would you be open to a Black Army Jacket reunion?

“We did two shows a few years back and we had a lot of fun. At this point, I think I’m fine with just leaving it at that, but who knows in a few years. We’ve gotten to play in other projects since Black Army Jacket broke up, such as Hope Collapse and Deny The Cross. We’re still close friends and that’s the most important thing.”

222 and the Closed Casket compilation are being reissued on February 22, via Magic Bullet Records.

Are Nails the nastiest band in metal?