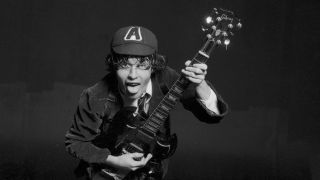 I first saw AC/DC on television back home in Sydney, probably in the summer of 1975.

The band performed High Voltage on some early evening Saturday TV show. Sadly, it wasn’t their immortal debut on Countdown, the Australian music show, where they’d performed Baby Please Don’t Go with Bon Scott dressed as a schoolgirl, but High Voltage was released as a single in July 1975 (it had already served as the title for the band’s debut, released in February that year), and was the first song from sessions for the follow-up T.N.T., which would be released in December. I recall my mum commenting on Angus’ schoolboy get up, and that was what really struck a chord with me. Only 10 at the time, here was some band playing electrifying rock ‘n’ roll, with some kid on guitar who barely looked older than me. I was hooked.

The usual street rugby game that would have normally ensued on a Sunday morning was curtailed. My mates and I had only one topic of conversation: “Did you see Acca Dacca on TV last night?” Of course we knew about AC/DC – half my mates had older brothers whose record collections we would raid when they were out and the band had already created an almighty buzz with Australia’s kids since their debut at Chequers on New Years Eve 1973. Even as we bordered on entering our teenage years, our own musical tastes were shifting away from the likes of Sherbet’s light rock to bands like Skyhooks and Hush, a couple of Aussie glam rock bands who were massive down under, but meant little outside of Oz. AC/DC flirted with a glam image during their very early years, but they had something a little extra. And now we’d actually seen them. We wanted more…

It’d be fair to say that growing up in North Sydney our little gang were your usual bunch of lovable larrikins. Up for anything, especially if it meant flirting with the rush of excitement that came with dicing with danger. So when one of our mates suggested it’d be a great idea to actually try and go see AC/DC in the flesh, playing live, most of us agreed that indeed that was just bonzer. Not even the older brothers had pulled that one off. It’d certainly give us bragging rights. None of us were averse to climbing out the bedroom window for a bit of after dark fun and games, and to date none of us had been caught. But having said that, I’m not certain most of us ever thought we’d really try and pull of a stunt as heavy as this.

Getting to Central Station is Sydney wasn’t difficult. Sydney’s rail system was certainly not the security-minded affair it is today. Trains would run from North Sydney down through Circular Quay on the south side of the Harbour Bridge, half the sliding train doors open the entire journey (frequent news reports of some hapless school kid who’d taken a tumble were rammed home by stern parents). No ticket barriers, the odd guard. Nothing that represented much of a hurdle to some determined kids with one thing on their mind.

AC/DC toured for the better part of 1975 on their High Voltage tour, largely swinging between Melbourne where they now resided, and Sydney, which was their original home base. It was sometime in July that, wide-eyed, we made our way to Sydney, to try and find the Bondi Lifesaver club, where we’d discovered the band were performing. Situated at 56 Ebley Street, Bondi Junction, a fair way inland from the famous sandy beach, the club was two old terraced houses that had been knocked together. It had a long bar running down one side and a big fish tank. It was the kind of place I’d never been to before, but the kind of dive I was destined to spend much of my later years.

Obviously we had absolutely no idea how we were even going to get in to see the band, jumping on a bus down Oxford Street, trying to avoid the gaze of anyone who might question what on earth we thought we were up to. But I guess a handful of scruffy young kids (not everyone from our group had dared make the trip) running around Sydney wasn’t headline making news in 1975. In fact, I doubt anyone even cared. Amazingly, the one group of people who most certainly did not care were the club’s security men.

Having arrived to find crowds of eager AC/DC fans milling around outside the club we obviously had no idea what to do next. We had no tickets. We certainly weren’t going to be sold any, being clearly way too young anyway. Wary of such a large and seemingly intimidating crowd we wandered round the side of the venue, the realisation that our journey had been one of utter folly, not to mention a folly that was going to land us deep in the shit upon our return. And somehow we arrived at the stage door. Amazingly, instead of telling us where to go in no uncertain terms, the guys standing guard to this small dark portal were laughing at us. This merely aded to the sense of unease and creeping feeling we’d all dropped a big one. Until one of them uttered the immortal words “Come to see your mate?”.

AC/DC were no strangers to milling with their fans when they started out. Aside from Angus, they all looked just like them anyway. And tales of fans helping them load in their gear and staying for the show are the stuff of Australian legend. Now whether these were the club’s security men, or the band’s roadies, what they clearly found amusing was a bunch of snot-nosed school kids who’d turned up on the off-chance they might get to see a band whose guitarist dressed like a snot-nosed school kid. And almost unbelievably, they let us in. I’m not sure we really appreciated what was happening as they stepped aside and nodded towards the door, laughing heartily amongst themselves. Walking into the encroaching gloom I can still recall the thrill and fear pulsing through my veins.

So, what do I remember about the first time I saw AC/DC live? The heat. The noise. Staring at people’s arses and backs. Being drenched with sweat in about a minute. I can hardly tell you what they played. High Voltage obviously, and the band’s debut single Can I Sit Next To You Girl. Their cover of Baby Please Don’t Go. Probably most of the High Voltage album. The sound was deafening. Grabbing occasional glimpses of the stage and band as the crowd (who admittedly all, from biker to rock moll, treated us with bemused appreciation) swayed in time with the music. Bon Scott’s high-pitched yelp. The crowd parting as Angus frenziedly leaped into the crowd, his lengthy guitar lead getting caught round half the audience. But mostly the immense rush of euphoria that a great rock ‘n’ roll show will give you. That’s something that in the ensuing 40 years, has never left me when it comes to seeing AC/DC live – I racked up my 50th DC gig at Wembley Stadium this July.

Sadly, I also remember the arse-whooping we all got when we returned home. An irate set of parents berating station staff, the mass grabbing of hair, ears, limbs, anything they could lay their hands on as each of us was admonished for being so outrageously foolish. The false displays of swift repentance as we were told in no uncertain terms our days of acting like idiots for the sake of rock ‘n’ roll were over. How we were all grounded. How there was no more watching “that bloody Countdown!” for us. But mostly, no matter how much our arses were already smarting, the discreet winks and nods between us. That we’d pulled this one off. As the bollocking of a lifetime began, between us, we knew it had been worthwhile.

We were all grounded for what seemed like ages. It didn’t stop us pulling off the same stunt a couple more times before the end of the year, grounded all once again except for the final venture. I did think I’d also seen the band at the legendary Chequers in downtown Sydney as well, but writing this makes me think I possibly got that confused with seeing Cold Chisel a few years later. I know that the last time I saw AC/DC in Australia was on their Giant Dose Of Rock ‘n’ Roll tour of early 1977. I know I missed the band’s two gigs back at the Lifesaver that served as Cliff Williams’ first two shows as new bassist a few months later. And the band never returned to Australia while Bon Scott fronted the band and I lived there, only returning in 1981 with Brian Johnson by which time I was in the UK and had already seen them on the Back In Black tour.

It was certainly a baptism of fire, fuelled by youthful naivety, stubbornness and folly. And one that kickstarted a lifelong love of both AC/DC and hard rock music, which in turn has led to a career writing about it. In which respect the sore behinds and ringing ears (punished both aurally and pugilistically) were a tiny price to pay. Years later, my dad admitted that we’d actually all been rumbled that final night we wagged off into town too. By which time the olds had pretty much decided more direct discipline would just fire us on further. He was right too. Maybe he just knew it wasn’t going to make a difference. But whatever the reasoning, boy, it was it all so worth it.