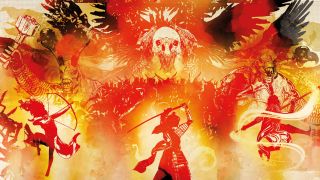 You’ll confront a demonic, fire-breathing chicken, stare into the jaws of a hideous vulture, and plummet into a void. Yet the most surprising thing about the new Babymetal comic book is that it doesn’t feature Babymetal. Apocrypha: The Legend Of Babymetal instead tells the story of the Metal Resistance, the title of the band’s second album and the name for a trio of female warriors who must fight evil through the ages. In each time period, each girl has a new outfit and a new name. Think Buffy The Vampire Slayer, except with three Slayers, and the elusive Fox God as their mentor instead of school librarian Giles. The one constant across the eras is their superpowers, based on the elements ice, fire and air. By watching how the characters use them, Babymetal fans can soon work out which 2018 member they correspond to.

“The personalities in the book are intrinsically tied into their individual supernatural powers,” explains GMB Chomichuk, the Canadian artist who illustrated the graphic novel. “Icy and resolute, fiery and spirited, fearless and bold. I think when the fans read the book, they’ll be able to easily ascertain which personalities have carried through over time.”

Manga is the next logical step for a band like Babymetal, who remain an anomaly in our world. Created by a mysterious manager known as Kobametal, along with Japanese company Amuse, they’re based on the country’s ‘idol’ groups – young popstars who project a clean-cut image and inspire devotion in their followers. Through massive riffs, distortion and visual call-backs to the likes of Metallica, Babymetal disrupted the model, but its traditional structure remains. Mystery surrounds the recent departure of Yuimetal, while Su-Metal and Moametal’s private lives are closely guarded, meaning they come across like fun-loving characters rather than three-dimensional people. Ripe for merchandising, they weren’t involved in the creation of the comic.

“Babymetal didn’t have any input on the story and the art, because we’re dealing with the Metal Resistance through time,” explains GMB. “It would have been different if we were doing a straight biography or contemporary story of the band, but given the nature of the book, all we really needed was to let them be them and let their onstage eminence shine.”

Written by Kobametal, scripted by US company Z2 Comics and illustrated by GMB, Apocrypha: The Legend Of Babymetal is a visually stunning thrill-ride through the band’s fictional universe. That ‘onstage eminence’, the energy they create during gigs, is splashed across every page of this high-concept book, in the vibrant colour palate and fast-moving action sequences that take place everywhere from Japan in 1640 to Virginia in 1972. Thanks to the power of the internet, GMB was already aware of Babymetal when Z2 approached him two years ago about illustrating the book, but was nervous about whether he was the right person for the job.

“I first fell down the rabbit hole while looking for news about [Masamune Shirow’s seminal cyberpunk series] Ghost In The Shell, one of my favourite manga. I guess I have an algorithm to thank for introducing me! It wasn’t something you could forget, what with the tutus and the Kami Band in their corpsepaint,” he smiles. “When I first agreed to do the project, I did days of work to depict Babymetal in my own visual language. This was about seeing if I could get them right, even knowing the story wasn’t going to call for them as they are. My work is not typical in comics; I use illustration collage, painting, texture overlays. It may sound strange, but my biggest worry was if I could capture the sound in the pictures.”

Not only did GMB listen to lots of Babymetal for inspiration, and travel to see them live in Nashville, Z2 gave him a playlist to put him in the right mindset. It was a surprisingly deep dive into the genre for someone who’d only ever dipped in a toe, spanning contemporary metal, industrial and folk, as well as J-rock.

“Babymetal are epic and operatic, so I was sent a wide array of music,” he explains. “There were more well-known acts like Opeth, Ghost and Godflesh, but because we were delving into more obtuse details of different time eras, we also explored more experimental acts like Oranssi Pazuzu, Abraxas and Heilung. We also explored the rich history of metal from Japan, including early D-beat bands like Disclose, experimental chaos from The Boredoms, bruising doom sludge from the likes of Corrupted, and the classics from X-Japan – which I was clued in to listen to after seeing Su Metal pay homage to Yoshiki by wearing a neck brace onstage.”

Immersed in this new world, GMB diligently set to work for eight months. A typical day entailed getting up early to spend time with his kids before they went to school, walking to his studio in downtown Winnipeg, and mixing up his metal playlist with the likes of Tom Waits, John Carpenter horror movie soundtracks, Beethoven and Holst. When it came to Babymetal’s adventure, he and the team knew they didn’t want to follow in the footsteps of standard novelty rock comic books, and planned to layer the narrative with darkness and mystique.

“The pinnacle reference will always be the Kiss comic book, which perhaps is more famous for having the blood of the bandmembers mixed into the ink than the story itself,” reflects GMB. “Rock and metal comics tend to follow a similar trope of the musicians becoming superheroes, endowed with magical instruments and using the power of their music to defeat evil. We really wanted to avoid that. We took the approach of telling a story that was more about what the band’s music felt like, as opposed to showing the band in comic book scenarios.”

That feeling comes across in the gnarled bodies of their enemies, the desolate landscapes, and the brutal crunch of weapons on flesh. At one point, a grim array of corpses dangles from a Vulture God’s body. For the costumes, GMB drew on the look of ancient Samurai warriors, the aesthetic of the American fashion house of Halston, and even the armour-plated Joan Of Arc outfit that US actress/singer Zendaya wore to this year’s Met Gala. Apocrypha is more cinematic than cartoonish, more adult commuter reading material than child’s bedtime story. But it’s also simple to dip in and out of, with each location presented as a separate chapter.

“Since we were dealing with a story set in different times, each era could be its own self-contained story that shared stronger, overarching plot elements,” explains GMB. “It was a unique situation, in that the plot could adapt and evolve depending on what we learned through our historical research of each era. It was great fun.”

The struggle of good versus evil and time travel are themes GMB has previously touched on in his work. His “big, bombastic stories” include Midnight City, featuring pulp-era and Golden Age heroes against H.P. Lovecraft- and H.G. Wells-inspired monsters, and Infinitum: Time Travel Noir (“It’s everything I like about film noir, but I replaced the misogyny with time machines and ray gun fighting,” he explains). Meanwhile, Cassie And Tonk is an all-ages graphic novel about a girl and her robot at the end of the world. His awareness of manga also informed Apocrypha, particularly the landmark, post-apocalyptic Akira, and breakout sci-fi success Mobile Suit Gundam Thunderbolt.

“Under its pop veneer, Babymetal is crushing metal music that lends itself to darkness,” he begins. “Katsuhiro Otomo’s Akira is the bedrock for any story dealing with young people burdened with psychic or supernatural powers, and it’s almost impossible to find a single comic book in the world that doesn’t even have

the minimal fingerprints of his masterpiece. Gundam Thunderbolt by Yasuo Ohtagaki also captures my imagination. Its look at war and resistance through the lens of music and jazz improvisation, and ways in which people cope with the destruction of body and mind, were very creatively inspiring as I thought about the Metal Resistance.”

Japanese folklore informs the plot, too. Apocrypha includes many Y¯okai spirits and demons, including a Basan – “a giant, fire-breathing chicken”. Also referenced is the Kaikidan Ekotoba, a scroll from the mid-19th century that contains descriptions of 33 legendary monsters. Yet the book goes beyond the conventional polarity of good versus evil to examine the grey area in the middle. The Metal Resistance start off fighting bad guys, but soon begin to question their intentions and those of their nemeses, resulting in a surprising conclusion.

“Something that always fascinated me about the difference between western mythology and Japanese mythology is how the power of a supernatural creature determined its stature as a god or a demon, but its actions determined it as good or bad or right or wrong,” he considers. “It always struck me as a moral frame that’s easier to admire. A creature isn’t right because they’re powerful, they’re right because they’re moral.”

These questions of integrity played on his mind as he worked through the project, and moulded

the direction of the story under the watchful eye of Kobametal. “As the book progressed, I got to know these characters better, and I got to understand that Metal Resistance wasn’t so much about fighting, but rather employing empathy and compassion in the face of bleak nihilism,” he concludes.

Apocrypha was announced on April 1, AKA ‘Fox Day’ – Babymetal’s equivalent of Christmas Day, where they reveal new music or parts of their mythos. Fan reactions were typically intense, ranging from ‘Frigging awesomesauce!’ on Twitter to endless conjecture on Reddit, about the content of the book and Kobametal’s longterm gameplan. It came as a shock to GMB, who’d never been exposed to this level of fandom. He isolated himself from it so it wouldn’t inform his creative decisions.

“The challenges were in the boiling cauldron of social media,” he says. “I like it when social media is about talking to people, not talking about them. As soon as someone told me, ‘There’s a Reddit thread about you’, I deleted Reddit from my phone. I’m pretty active on social media and that’s what it’s good at – wild speculation. But I think one should avoid it when they’re looking to keep the influences and motivations of a project internal.”

The trailer, unveiled at New York Comic Con in October, notched up more than 100,000 views and features 27 seconds of new Babymetal music – another point of wild speculation as Reddit users turned detective, used Shazam, and turned up the title, Starlight. Other questions include: when will the next record be out? What will it sound like? And, more importantly, what does Babymetal look like in a post-Yui world? No one has the answers except Kobametal… and maybe the

Fox God. For his part, GMB is proud of the book’s place in Babymetal’s mythos, and is open to moving their story forwards.

“If the book is well received and we got it right, then I would absolutely be open to doing a sequel,” he enthuses. “What I would love to do is craft a few pages of a book during a recording session and try to capture that raw energy on a page. We and the band have built a universe so rich in detail that the narrative possibilities are really quite endless.”

Originally published in Metal Hammer 316. Apocrypha: The Legend Of Babymetal, is out now via Z2 comics