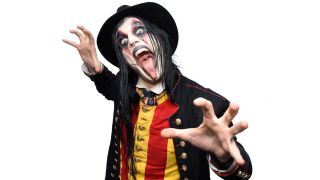 Currently touring the USA, Hammer caught up with Avatar’s travelling circus for a quick chat with frontman Johannes Eckerström for a ringmaster’s guide to new concept album (and its accompanying book) Feathers & Flesh; a fable of war between the Owl, queen of the night and the Eagle, who threatens to end her reign. It’s a morality tale told from the perspectives of the creatures themselves, and it’s the band’s most musically diverse effort yet. “There’s so much depth to be discovered,” enthuses Johannes, “but it’s also a kickass heavy metal album – a chug a beer, fist in the air, bang your head kind of thing.”

So without further ado, step right up…

“It’s the first time we’ve ever had a separate track to introduce an album. There’s a classic metal aspect to what we’re doing this time. We are striving for epicness! In the story, we begin at the end, with the Owl’s regret. There are those wonderful things in metal that for people who don’t get it seem like a parody, but if you’re into it, it’s the most beautiful thing ever; our Manowar Hail And Kill moment. The whole thing starts with a shredding guitar solo – a musical mission statement for what is to come.”

“This is the Owl’s anthem; her statement of the way she looks at things. She gets to be this kind of beautiful metaphor for nature and greatness and hope, but she’s stuck in her ways. Change is a concept she doesn’t understand at all. Musically, it’s inspired by a band we’ve been fans of for years, and the big reason I stopped cutting my hair – Helloween. When you want an epic song about a bird flying they have a song called Eagle Fly Free – this is our owl fly free!”

The Eagle Has Landed

“If you follow the narrative of the story, that song and House Of Eternal Hunt pretty much tell the same story, with slightly different musical approaches, which gives the different attitudes of the Owl and the Eagle. In House… we sympathise with the Owl, but when her enemy the Eagle arrives, he says ‘I am your hero’, introducing himself quite arrogantly, and I feel the music is pretty arrogant, it goes for that kind of attitude.”

“This is the first time we see weakness exposed in the Owl. The Eagle threatens to eat her eggs, so she flies away from the forest to hide them far, far away, and in the lyrics, she swears to protect them no matter what – but it’s an empty promise because you cannot always protect your children from the world. You don’t have to fear a terrorist attack every morning on your way to school, but whether it happens or not is something totally beyond your control.”

“With her eggs in a safe place, the Owl can go back to being her old, raging self again. She rallies her troops, the eyes of the forest – the creatures of the night. They represent mob mentality. They are easily angered and put to battle against the Eagle. This is their fight song. We had lots of fun with this – I don’t know if rockabilly drums represent mob mentality that much, but there’s a tempo that gives it this battle lust. The lyrics excite me – they speak to that state of mind within us all. You’ll want to join the party.”

“[The Owl approaches a swarm of bees] to find new fighters. The Bees say no, they have no interest in something as vain as fighting for one person’s cause. ‘You’re just one; we are many, building more’. They symbolise the greatness we can achieve when we all work as one for a common goal. When you share goals with others and everyone involved gives their all, that’s when you achieve true greatness. It’s kind of how I view what we do now. It’s relentless – a work song. I’ve had it stuck in my head in the gym – it works!”

“Musically this song is self-explanatory. It’s about a Grasshopper playing a sad ballad, mourning the death of his friend, the Ant. Having faced threats – fear, anger and clashing of ideas – this is the first time we see the Owl experience sadness and loss. The Ant was trampled in the fighting – a civilian casualty of war. It’s the first time that someone tickles the nerve of empathy in the Owl, and that fucks with her. It’s a very painful lesson for her to learn.”

“The battle rages on, the Eagle tearing opponents apart one by one. It reaches a point where everything seems hopeless. The mob watch each other die at the hands of the Eagle and their hatred is aimed towards the Owl instead. When a great dictator can no longer keep their word, they’re hung by the people. The main riff has this marching fatigue as their rage is building and building until they all lose control. We go into old school death metal and then an almost disco inspired groove once their rage is unleashed.”

“The Owl goes into hiding – the mob is after her. The Wolf is an old warrior who has given up on life; he’s always been looking for one last great battle and ends up living through the Owl. He needs something to fight and die for, but the Owl has given up and dives into a dark moor. She sinks to the bottom where a Pike encourages her to stay. ‘Stay with me, dwell in the darkness, I’ll keep you safe from the world’– that’s depression talking. Its doomy and bluesy –classic musical tropes for talking about depression.”

“The Wolf pulls the Owl out of the moor, and he starts shouting about the promise of a night never ending – which is what she is fighting for. In the grand scheme it’s totally deceptive; he can’t promise that the night will never end. He has selfish reasons to want her to fight – he’s living through her. We get a glimpse of light, because she has been so challenged along the way about how wrong she is, her world has been completely shattered, but still she is who she is, we can evolve, but sometimes we need to embrace that we are who we are.”

Pray The Sun Away

“The final battle. A Bear shows up, having watched everything from a distance. The lyrics go something like, ‘As I go to the river to drink, I realise your tears all taste the same.’ The verses are sung in unison by the Owl and the Eagle, it’s their final confrontation. They’re on opposite sides, but because they are both so extreme they end up both being the same; Hitler and Stalin – what’s the difference again? It’s one of the more complicated songs, kind of psychotic. There’s never a release; musical gore I would call it!”

When The Snow Lies Red

“The Eagle has died and the Wolf lies dying. The mortally wounded Owl sings this song to her dearest friend. It’s a lullaby for her dying friend, an outburst of love and an attempt to understand what the Wolf has meant to her. It is a tribute to him. It has a balance between epic and melancholy. We’ve always been very bad at pulling off Iron Maiden, but this track is a tribute to track two from Piece Of Mind, Revelations.”

“The Owl can’t fly anymore and is crawling, climbing up the mountain, trying to see her eggs one more time before she dies. Behind her in the forest the Ravens arrive, feasting, getting drunk off the blood of the carcasses of all the dead animals – decadent pigs profiting from the suffering of others, and not only finding pleasure there, but bliss. Musically it’s the most psychedelic song- it’s about the birds getting high; the term ‘blood drunk’ comes to mind.”

“We tie back to [opening track] Regret, because sadly the Owl is full of anxiety and regret right before passing. She’d like to go back and start over again. She knows more about the world than she did at the beginning, but she cannot accept the way things are. It’s not until she dies that acceptance comes in the form of stepping into oblivion, where it doesn’t matter if you accept it or not. I had a period of severe death anxiety for a while; it struck me real bad – otherwise I wouldn’t be compelled to write about it!”

Avatar’s new album Feathers & Flesh is out May 13, via Another Century. They also play the Saturday of Download festival on June 11.