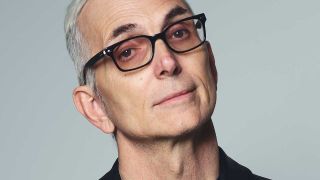 I wanted to make this record because I wanted to do something fun, challenging, and something I’ve never done before. I’ve always thought that making a solo record would be cool if I did it all by myself, and though I did need help with the engineering and production, I wrote all of the songs, played all of the instruments, and sang all of the vocals.

I co-produced the album with my friend Stuart Schenk, who is a great producer and engineer. I think this record shows a different side of me as a singer-songwriter, producer, and overall person. I’m older now, and I have more of a sense of humor about things. I don’t take myself so seriously, but I take the world, my work, and my family very seriously, and I think I’ve found a great balance as I get older.

Unfortunately, I wish we all had the health we had when we were younger, but that’s kind of the price you pay.

Sun Songs is out now. Art Alexakis kicks off his UK tour next week. Dates and ticket details below.

I wrote this song for my wife Vanessa because she told me I had to write her a love song. I had already been working on the melody and finger picking - I don’t really finger pick a lot, but the thing with this record is that I wanted to push my comfort zones and do things that I haven’t done before. So that’s kind of what happened with this song; my wife told me she wanted a love song, so I wrote her a love song.

This song, once again, is a love song, written for my wife and the life that we have together. After being diagnosed with multiple sclerosis (MS) and going through all of the things that I’ve gone through over the years, I’m in a great place now - I’m back living in California, I’m loving it, and my family is happy.

House With A Pool

This song is kind of tongue in cheek, socio-political, sarcastic humour. One of the things about living in California is that everyone has a house with a pool. It’s kind of this status thing. This song is kind of a poke in the eye of this whole attitude that got us into the great recession in the first place, where people who were making $30-40K a year were buying $500-600K houses and it just wasn’t sustainable.

The people who sold them their mortgages knew they were going to go belly-up and that they (the lenders) were going to make money on the backside as well. It just kind of pissed me off. This song is kind of poking fun at myself as well, because I’m having a hole dug in my backyard right now. Yes, I too am going to have a house with a pool.

This is a socio-political, almost comical poke in the eye to the fact that Orange County, which has been a conservative bastion forever (or at least my whole life), is now pretty much represented by a majority of Democrats.

So that’s what the line “orange is turning blue” refers to. It’s also what happens when you stare into the sun or something bright for too long. You’re looking into something shiny and beautiful, and sometimes it bites you in the ass.

This song is about my MS diagnosis. The reason I called it The Hot Water Test is because back in the ‘40s and ‘50s, before they knew how to diagnose MS, the only way they could diagnose it is knowing that people w/ MS had a very acute sensitivity to heat.

The doctors would put them in super-hot water, 115 degrees to be exact, and wait for them to start showing symptoms. It was pretty barbaric and miserable. I feel like, after being diagnosed with MS and learning more about it, people with MS, autoimmune diseases, or cancer have to deal with these diseases all the time, so every day is a hot water test.

This is a flat out love song for my little girl, my youngest daughter. Her name is Arizona Star Alexakis, and she’s the coolest person I’ve ever met in my life.

Look At Us Now

This is probably the oldest idea I’ve had for a song that actually made the record. I originally wrote this for a pilot for a TV show and it got rejected, but I really thought it was a cool idea. When I was making this record I broke out a bunch of ideas that I’ve had over the years and this one still resonated with me.

A lot of them didn’t, but this one definitely did, and upon finishing it, I really loved the way it came out. It’s upbeat, it’s happy, yet it’s got a little darkness - typical ‘Art Alexakis’ for sure.

This song pretty much needs no introduction, no reasoning, no explanation. If you’re watching the news and you’ve got any common sense whatsoever, you’re going to get what this song is all about. Is it political? Yes. Have I always been political? Yes. If you think I haven’t, you haven’t been paying attention. White people scare me.

I think this is a song that’s going to confuse people. It’s not about anyone in my life. There’s just been such a rash of kids being shamed and bullied online, to the point that sometimes they commit suicide. This song is written from the perspective of a parent, just after losing a child for those reasons, and what it must be like for them to deal with it.

To me, that would be one of the worst things ever. My youngest daughter was slightly bullied when she was six years old and I almost killed people because of it. That’s how upsetting it was to me. This song is more realistic; it’s an emotional point of view of what the relationship between the parent and child is like, and why they often struggled to communicate.

Line In The Sand

I’ve had the chords and the melody for this song for a few years but I didn’t really have the right story for it. I thought it was such a great melody and such a great chord progression that I didn’t want to do anything with it until it became real. When I started working on this record I started playing the song and writing down ideas.

This song is in the same vein as a song that I wrote for my record Songs From An American Movie: Volume 1, which has a 20th anniversary coming up next year in 2020. That song, called “Learning How To Smile”, is one my favourite songs that I’ve ever written. This is a song about two people out on the road trying to find their way, only this song doesn’t have a happy ending, as it’s more realistic than idealistic.

It’s about two people that could be straight, gay, gender fluid - it really doesn’t matter. They’re just trying to find a place in this world where they can get jobs and get clean.

A Seat At The Table

This is another political song. It’s kind of tongue in cheek, once again, thus there’s a sense of humour to it, but it also has the anger and gash that goes into being me.

It’s about how people in the U.S. are brought up to believe that we all have a voice in this thing ‘we the people’, but really when it comes down to it, it’s always been about people who are white and have money, guns, and control, and like a lot of people, I’m tired of it. Like I say in the song, the time for polite is over.

Sun Songs is out now. Art Alexakis kicks off his UK tour next week. Tickets are on sale now.