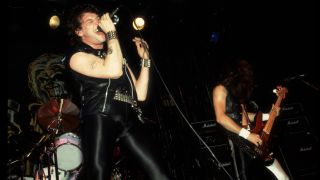 Former Iron Maiden frontman Paul Di'Anno celebrated his 56th birthday on May 17. In this archive feature he looks back on his often troubled and violent past. Warning: contains some disturbing anecdotes.

“Yeah, sorry about that. I went to see them play at the Cart And Horses in East London, and their old singer had this silly sword and fake blood dripping from his mouth and me and my mate were pissing ourselves laughing. When I got introduced to Steve Harris I couldn’t keep a straight face. And when he talked about me going for an audition I thought ‘Bleeding hell, I don’t fancy prancing around with a sword’ and I didn’t really want to know. But when we started playing together it just seemed to gel.”

Those early days with the band must have been fun.

“They were brilliant. The early gigs were mad. After playing in little pubs in East London with my band, I’d be going up to Scotland or somewhere with Maiden and find that we had fans all over the country. It was totally bewildering to me. I’d go back to work and piss people off by talking about it all day. But I was able to jack in my job when things started taking off after the release of ‘The Soundhouse Tapes’ and that’s when the real fun started.”

“Yeah, that was unfortunate. By the time of ‘Killers’ the band was getting a bit more technical and losing some of that edge for me. I didn’t think that the songs had the same sort of attack, and then I started losing interest. I felt that I might be letting people down by voicing my doubts so I said nothing but then it all built up to the point where I was rubbing Steve up the wrong way. But I did feel relief when I played that last gig with the band.”

The whole thing ended with a whimper rather than a bang then?

“Yeah, but that’s probably the best way. There’s no animosity between us, and although I haven’t seen the boys for a long time, when we do meet up it’s always okay. Maybe I should have said more towards the end, and I hope that Dave and Steve don’t think that I was ever giving less than one thousand per cent when I was in the band.”

Did you listen to ‘Number Of The Beast’ when it first came out?

“Yeah, it’s the only other Maiden album I’ve actually got. It’s a fucking brilliant album. Bruce is a fantastic singer, and I do believe he’s the best singer Maiden ever had. But I think we had better songs when I was in the band. Bruce’s voice is totally right for Maiden, but when I meet musicians from Pantera or Metallica they always say that they regard those first two albums as Maiden’s best ever.”

But you sold your publishing for those two albums back to the band for just £50,000?

“Yeah, something stupid like that. My manager sorted it out and I think I just signed it without thinking much. It’s a good job I actually make some money of my own albums?

In your autobiography, ‘The Beast’, you say that the first two Iron Maiden albums went to Number One in the charts…

“Yeah the first one went straight in at Number 1.”

“Well Rod Smallwood is a liar then, because he told me we were Number 1. I don’t know, I don’t know my arse from my elbow some days.”

What sort of reaction have you had since you put out ‘The Beast’?

“Mixed reactions. When my first wife Beverley, who’s my best friend in all the world, read it she said ‘That’s not the bloke I married’. I said ‘Well, it was your bleeding fault it went tits up in the first place’. My aunt and uncle both bought the book, and my aunt took it back to the shop. ‘Fucking disgusting’, she said, ‘I’m not reading that filth’.”

How did Beverley react to all the graphic stories about shagging in the book?

“Well I’d talked to her about exactly what was going in the book before it went into print so she lived with it before it hit the shelves. We’re kinda negotiating possibly getting back together, and when you’ve known someone 22 years you can forgive a hell of a lot.”

Presumably you treat girlfriends and wives rather differently than you treated those random girls on the road?

“Yeah, slightly. You couldn’t take those girls back to meet your mum. We met some right fucking slags on the road, but they were only doing what they wanted to do, and if they were happy to be with us, who am I to say ‘No’?”

You once put a gun inside one of these girls: exactly how terrified was she?

“That’s what I asked at the time (laughs). She was one of those stupid women you meet in America who’s like ‘I can do this and that’ and she wouldn’t shut up. I got the idea from an old drummer in a previous band, who met these couple of girls while we were recording in Wales. He took one girl into his bedroom and she kept saying ‘Fuck me and hurt me’. So he took the phone off the wall and hit her over the head with it and said ‘Well that’s fucked you and it hurt didn’t it’. This girl in America kept saying ‘Really fuck me’ so I just couldn’t resist it. I put the gun inside her and said ‘How’s that one bitch?’ That shut her up.”

No offence, but you come across as a very scary man in that book.

“Oh mate, if you could see me at home with my kids you wouldn’t think I’m scary. I’m drug free now and I’ve got a bit of focus back in my life and a lot of the aggressiveness of the past is gone now.”

Was it difficult for you to revisit subjects like your domestic violence and drug abuse for the book?

“Yeah, it was bloody hard to come to terms with. When you’re fucked up on drugs and alcohol you turn into a complete prick, a fucking psychopath. I’m not proud of some things I’ve done in the past, but these days I’m more likely to take a smack in the mouth than dish it out.”

You were actually sent to jail for assaulting a girlfriend with a knife while on a cocaine bender: was that the lowest point in your life?

“Absolutely. My biggest regrets are those domestic violence incidents in my past, I’m really ashamed of them. But then jail was the thing that eventually made me start to sort my life out so there was some good in it. I don’t ever want to go through that again. When you see violence in US prison shows on TV you think ‘That wouldn’t happen’ but believe me it fucking does. It was fucking scary at times. When I watch those prison dramas on TV the hairs on my neck still stand on end.”

So how is life for you these days?

“Good mate. I’m really bloody busy these days. I’ve got a punk band called The Almighty Inbreds for fun and I got into off-road skateboarding for a while which was a laugh. Tomorrow I’m going eel fishing with a mate and my son, and I’m really happiest when I’m just chilling out with Beverley and my family.”

No matter what you do now though, you’ll always be ‘Paul Di’Anno from Iron Maiden’: does that make you happy?

“Well, I have to live with it. I have my own band, but I still have to go around playing these Iron Maiden songs and it does piss you of a bit. No matter what I do it gets compared to Maiden and then I get slagged off. I’m quite a sensitive little lamb on the inside and I get hurt by the press criticisms, there are times when I’ve said to Beverley ‘Fuck this, I’m going to get a job in McDonalds or something’. But now my philosophy is ‘Fuck ‘em all’, and I’m just going to do what I want. I might be doing something on the next Sepultura album, I’m halfway through writing a new solo album and my band Killers will probably do an album next year. I don’t want to end up being in an Iron Maiden karaoke band.”