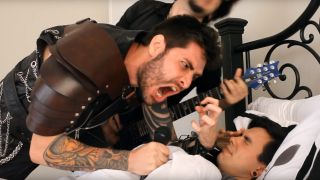 You love metal, right? You listen to metal for almost every hour of the day? Good. But have you wondered how horrific it would be to have your very own metal band follow you around for infinity?

YouTubers Lyle McDouchebag and FamilyJules7x joined forces to create this Life Is Brutal video depicting a day in the life of one man’s struggle living with a metal band. From being scrutinised for his ball washing technique to dealing with his boss at work to having his secret passion for Facebook pictures revealed, it’s pretty awkward and annoying having your entire life narrated by a metal band…

…but that doesn’t stop it being hilarious.

How to make Metalhead friends