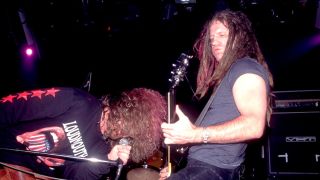 In issue 247 of Classic Rock we celebrated the greatest albums of the nineties, the decade where grunge exploded, metal got inventive, and Britrock’s green shoots showed there was plenty to celebrate this side of the Atlantic. But for every Soundgarden there were a dozen Sugartooths, bands who looked right and played right, but – for one reason or another – never made to the finishing line. Here’s five such cases.

Part of a brief, ill-fated late-90s biker-metal resurgence that also included less-than-hopefuls American Pearl, Chicago’s Loudmouth were very briefly rock’s great new hopes, a sort of Guns N’ Roses for the alt.rock crowd. They released one stellar, self-titled album on Hollywood Records in 1999, then rode off into the sunset.

Auburn, Washington’s New American Shame’s stunning self-titled debut (Atlantic Records, 1999), was the last great record of the 1990s, a crunchy, balls-to-the-wall riff-rocker that sounded more like AC/DC than AC/DC did in the 90s. Unfortunately everybody bought Korn records instead, and NAS soon imploded.

One of the first hair-metal-era rock bands to openly move towards darker sounds, San Diego’s Asphalt Ballet may have been the world’s first glam-grunge band. Their two early-90s albums on Virgin Records managed an impressive balancing act between hooky, pyrotechnic glam-metal and dark, bluesy hard rock. Nirvana still killed them, though.

Sugartooth flirted with the big time – a debut album on Geffen Records, a song in the Howard Stern film Private Parts (backing the shock jock himself) and an animated thumbs-up from 90s tastemakers Beavis & Butt-head – but somehow their deliciously poppy, supremely bummed-out grunge rock failed to light any fires.

It’s a mystery why Dandelion never really hit with the kids. They were cool, had great songs, major-label backing, videos on MTV (including the shabby classic Weird Out) and songs on TV shows and in films. The Philadelphia grungers released I Think I’m Gonna Be Sick in 1993 and Dyslexicon in 1995 – two albums’ worth of smart, hooky, swirling neo-psych slacker rock – before fading out in the mid-90s.

You can read about the greatest albums of the nineties in the latest issue of Classic Rock. Buy it online .