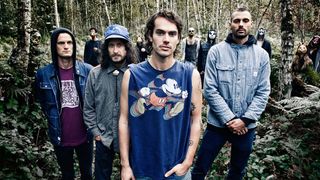 All Them Witches have released Alabaster, a taster from the band’s upcoming album Sleeping Through The War. It’s a woozy, hypnotic piece of brooding, voodoo psychedelia, nestling somewhere between Dr John, The Doors at their most wired, and Sigur Ros.

“Alabaster is about leaving behind a culture that grooms people for failure and finding a place in this world where it is ok to live as peacefully as the ‘animals’,” says the band’s Charles Michael Parks, “neither creating nor destroying, no good or evil, just existing.”

New album Sleeping Through The War has a lot to say about current culture. “Sleeping through the war is what we’re doing,” says Parks, “There are so many terrible things going on in the world and we’re just staring at our phones, and we don’t see it so we don’t care.”

Sleeping Through The War is released on February 24, and is available to pre-order now. The band are playing the Secret Garden Party this July 20th-23rd.

High Hopes: All Them Witches – Psychedelic jams and wizard tales