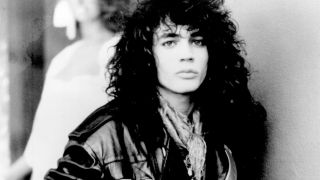 Adam Bomb has lived. A teenage guitar prodigy, he chose a life in Hollywood at the exact moment when Hollywood was at its most debauched, sharing an apartment with a young Izzy Stradlin and enjoying a series of memorable encounters with the likes of Eddie Van Halen, Aerosmith, Guns & Roses, Bon Jovi, Queensryche and Def Leppard. All this — and a lot more besides — is chronicled in Adam’s new autobiography 911 is Disconnected: So This is Rock and Roll.

In the excerpt below, Adam recounts his audition to replace Ace Frehley in Kiss. He was just 18 years old.

I read an ad in Billboard Magazine that read: Major Recording Act looking for a lead guitarist. Must be at least 21 years old, at least six feet tall, can sing, and have recording and touring experience. It said to send a photo, a tape of my guitar playing, and contact details.

I mailed it to an address in Los Angeles. It didn’t say what group it was for. I wrote a letter saying I was 22 and six feet tall, and popped it in the mailbox.

The phone rang. I picked up and a guy with a New York accent said, “Hi, is this Adam? My name is Eric Carr and I’m the drummer in the rock band Kiss. We’re looking for a new guitarist to replace Ace Frehley. Can you come to SIR Studios in Hollywood next week and audition? Kiss won’t pay for the plane ticket or hotel but you should find a way to get here and try out. You need to learn Firehouse, Detroit Rock City, Black Diamond and Doctor Love, OK? Oh yeah, one more thing, you have to sing one of them.”

It got around town that I was going to audition for Kiss. Everybody thought I was going to get the gig, so I started dreaming. I imagined getting my picture in People Magazine. Then I started thinking about how Kiss had a big anti-drug policy. I thought about what life would be like being the guitar player in a big band like that. I wondered, “It must be like a prison. How would I be able to hide smoking pot?”

I wasn’t 21 and 6 feet tall. I was 18 and 5’7”. I wasn’t so sure I was going to get the job but I was going to give it my best shot. I practiced those songs day and night. I learned every solo note for note. I played every lick, shake, and squeak that Ace Frehley made on the live and studio albums, and I had fun learning them. If nothing else, I was going to play those songs with Kiss.

I was about 45 minutes early for the audition. I went into an empty rehearsal room, sat on the floor, and started tuning my Floyd Rose. I waited by the door of the soundstage and listened to Kiss auditioning another guitar player. His leads were not so good. They weren’t like Ace’s solos at all. I watched the guy come out with a guitar case. He was really tall and ugly with frizzy brown hair. A minute later I was greeted by Eric Carr and we walked to the vending machine. He was short, like me. He was wearing sweatpants and white tank top. He got a candy bar and said, “Are you ready?” Then he brought me into the soundstage.

As I walked in, I saw Gene Simmons wearing his bass. Gene was leaning against a case next to his Ampeg SVT amp. When he shook my hand he was a foot taller than me. Paul Stanley was sitting on a couch. I introduced myself, and told Gene that I had met him before in Seattle. I had to look up at Paul Stanley too. They were nice, but not warm like Eric Carr was. Gene was wearing a black button down shirt with a black leather jacket, dark blue jeans and cowboy boots. Paul was wearing a blazer and blue suede boots that looked really expensive. They had already auditioned six people that day and nearly 40 others previously. My audition was the last one of the day.

Paul Stanley sang facing me, Gene stood to my right to watch me. Eric Carr counted us off, and I started the intro to Detroit Rock City. Paul Stanley followed me and Gene came in like thunder. It sounded really heavy playing with Gene Simmons on bass. He was a lot louder and had a much heavier sound than any bassist that I had ever played with before. When the drums came in and we hit those first two chords it sounded huge. Eric Carr played it really fast compared to how it sounded on the records with Peter Criss. It was really energetic. I watched Paul sing and I looked at my guitar neck and tried not to make eye contact and just watch them, watching me.

I had the Kiss songs down pat. I didn’t make one mistake. I wasn’t sure if the double lead I did with Paul was perfect but I did it just like Ace did on the Alive II album. After Detroit Rock City I asked, “What’s next?” Gene said, “Doctor Love.” I was psyched. I felt a little connection with Gene on how he was watching me. I really liked playing that song because it reminded me of AC/DC with those massive guitar chords at the intro. I said, “I’ll start it.” I cranked out the power chords and Paul Stanley followed me. I didn’t sing background vocals but when they all sang together it sounded great. I did a bit of my own lead work in there at the end. It ended with a big crash.

I wanted to scream but I kept my cool. I was still a huge fan. I pictured them in my mind from the record jacket for Kiss Alive and from seeing them in concert in Seattle. I felt like the whole world stopped turning for a moment. It was just me in a room in Hollywood, playing lead guitar with Kiss.

We did Black Diamond. Paul sang and played the intro while Gene and Eric sang perfect background harmony. Eric Carr sang the rest of the song. It was a very lyrical Ace Frehley solo and I had that solo dead on. We only hit the ending about four times before we sped up, instead of the 9 or 10 times before it speeds up into a big crash like on Kiss Alive.

I had Firehouse down as well. Paul sang it, and I did the solos perfect. I wanted to play with Kiss all day long. After we finished that they asked me about vocals and I said, “I didn’t learn how to sing any of the four songs. How about Rock And Roll All Night?”

Paul said, “That’s ok, you don’t need to sing. Why don’t you play us a guitar solo.” I switched to Floyd Rose and did the solo I was doing at TKO gigs. Paul was watching me closely and nodding his head up and down. All eyes were on me as I played every trick in the book. After I finished my guitar solo, Paul thanked me for coming and shook my hand.

I went over to Gene and thanked him, and I asked him, “So what do you think my chances are?” He looked at me and said with a slight grin, “Well for one thing I think Paul would get jealous because you’re too good looking, and maybe you’re a little too old.”

I was the youngest guitarist to ever audition for Kiss. I left the soundstage and Eric Carr walked me out. I asked him what he thought and he said, “You’re too short. I can only get away with being short because I sit behind a drum kit. And we’re looking for somebody that can sing. You’re younger than you said you were, but you played really good. You should keep it up. You’re great. Thanks for coming all the way from Seattle.” He smiled and gave me a hug. As I left SIR, Eric laughed and told me, “If we change our minds, I’ll call ya.”

I went back to Seattle knowing I didn’t get the job in Kiss, but for a brief moment I was part of their world. I loved the fact that I got to play guitar for them. I didn’t care so much about not getting the job, but I still felt rejected. I wasn’t ready for Hollywood and I wanted to go back home to my dog Oggie. I didn’t want to worry about smoking pot. I wouldn’t have quit pot for any job. Not even Kiss.

Adam Bomb’s 911 is Disconnected: So This is Rock and Roll is published by New Haven Publishing.