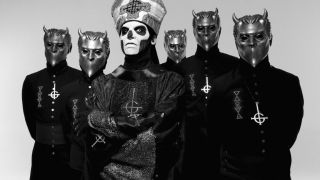 Ghost’s new album Meliora was released last week and is making huge waves in charts across the world – including a Top 25 position in the UK! But if you’re yet to immerse yourself in the majesty of it all, let one of the Nameless Ghouls guide you through it.

**Spirit
**I guess Spirit was thought of pretty early on as a potential album opener – the gateway to the city of Meliora. It’s the scene-setting composition that guides you in to the artwork, that defines the goggles you are looking through… I remember the opening riff coming together the day we started rehearsing for the Infestissumam tour, and the intro part of the song and the main theme, they had a certain sci-fi feel; the overall tone was very much in keeping with this futuristic album we were talking about making…

From The Pinnacle To The Pit
The kind of song I think we were missing – a fist in the air track, a rocket, an anthem for the parking lots of America before the show begins. I felt there was a place for a track like this on the album, a track with this level of intent, especially following on from Spirit. Sometimes simplicity is a good thing, that straightforward punch to the nose. With the last album, some of the songs, even the more straight-ahead ones, weren’t always easy to bring into the live set, but with Pinnacle…, once we started working on the demo, it just took on a life of its own…

**Cirice
**I think it’s important to pay attention to fans who’ve been there from the start, to invite them with you on the journey, so we needed to pick a lead track that would do that… I guess it could have been Pinnacle…, but in the end we felt that Cirice encompassed more of the things that we are. Of course, at six minutes, it’s not the most commercial song, and the listener is free to interpret the underlying message in whatever way they choose – although the literal meaning is to do with the manipulative nature of a sect or a church. Cirice means church. “I can hear the thunder that’s breaking in your heart”, I can see through your secrets therefore you belong here…

As for the video, the idea for that came from our side, the love story; even though Cirice has the church theme, it still feels very intimate, and I was keen for that to be there in the clip. Most of the things we wanted to happen ended up being filmed, apart from a couple – I’d like to have had the kid setting fire to his guitar then pissing on it! That would have been fun!

**Spoksanat
**It was evident early on that there was going to be an intense start to the album; also, I knew that He Is should close Side One (on the LP), so… it was clear that we needed something, a little interlude, to help transport the listener from one mood to another, and that was Spoksonat.

**He Is
**Now that the album is released, some people are talking about this song as something of a surprise, but to be honest, I’ve never seen it as a wild card, and I’ve been hearing it for a number of years – it was actually written for a different purpose with a slightly different title several years ago. We did try to include it on Infestissumam, but it didn’t work out; it was orchestrated in a way that wasn’t quite right, but now I love it. The fact that it’s been existing in our little circle of friends for quite a while says a lot, I think, about the quality of the song. It’s never gone away.

**Mummy Dust
**We went through a number of different track listings for the album, but eventually it became clear that this was the best way to kickstart Side Two – it also refers back to the start of proceedings, a reminder that you are in a futuristic city. It might not function as a clear and obvious single, but I do think it’s one of our coolest songs… you could say it’s very ‘Ghost-y’, and we’ll definitely be playing it live.

Majesty
In the chorus there’s the line, “Old One, master, all beauty lies within…”, but originally it was “Satan, master, all beauty lies within”; we decided to make the change because it was pointed out to us by the powers-that-be that the presence of the word ‘Satan’ on our last album basically disqualified the biggest song on that record from being played on the radio anywhere… really!

The story behind Majesty is pretty funny, though, and actually harks back to when we were recording Infestissumam in Nashville. The assistant engineer was a guy called Nathan, a really cool individual – beard, long hair, big passion for horror movies. We were sitting around the studio talking and I was tinkering away on the guitar, and he was telling us that he was on a dating site but wasn’t really getting anywhere, he just couldn’t meet girls who shared his interests… All the time I was jamming away, then suddenly I sang: “Nathan, goddamn it, all beauty lies within!” That’s where it all started.

Devil Church
Devil Church was originally conceived as the intro piece to Cirice, it was all one long song; eventually, however, it became clear that Devil Church could be slotted in somewhere else on the album, a way of providing a pause, a break, of adding to the feel of the record as a journey.

**Absolution
**You know, there was a point where we felt this could be the first single rather than Cirice; also, as I recall, this was the first song we worked on in pre-production. In a way, it jump-started the whole project – it made us feel that we had something special going on, and every time we went back to it we got that same vibe. It definitely has something about it… I’d use the word ‘victorious’, it feels very triumphant and arena rock-ish!

Deus In Abesntia
It’s no secret that we had a lot of trouble getting people to perform the choral parts on the last album, so this time around we made sure that everyone knew exactly what was going to be asked of them, and that they were fully aware of the content. You can hear the results on this track, although generally we’ve tried to use the choral elements more sparingly on this record, and that hopefully makes them all the more potent.

After all, for better or for worse, most people have some kind of a relationship with the church, so there are powerful forces here which tap into the subconscious. Overall, though, we’ve moved away from the gothic darkness on Meliora, the whole occult rock thing, but that’s not to say it won’t be coming back on album four. We’re already writing the material for that one. No rest for the wicked!