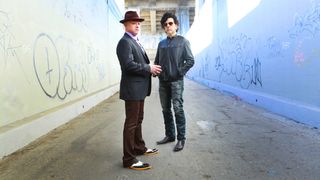 Picture a dive bar somewhere out west, a couple exits off the shimmering, hazy-hot highway. Nobody remembers what it’s actually called - the sign just says ‘Bar’ because it’s got no time for any fancy bullshit – but locals affectionately call it the Bucket of Blood. There’s sawdust on the floor to soak up all the liquids, bodily and otherwise. The jukebox is mostly Cash and Stones, and there’s nothing in it that dates past 1975. There’s nothing to eat except pickled eggs and maybe a knuckle sandwich if you get too mouthy. There’s a stage in the corner, and it’s covered in chickenwire. It’s unclear whether that’s to protect the band from the crowd, or vice versa. There’s a spotlight, but most bands just play in the murky darkness. Easier that way, given how ugly and alarming the audience is. Bikers, mostly, some ex-cons and repo-men, a few drunken poets and women with bad reputations and the men who loved and lost them somewhere down the line. Serious characters. Heavy players.

A joint like that needs a sturdy house band, one that can take a stray bottle to the skull and keep going. One that sounds like all your favorite bands at once but also curiously not like any of ‘em at all. A band with tattoos and bruises and impossibly colorful back stories. A band like 7Horse.

LA’s 7Horse are a duo. Some call them the Two-Man Rolling Stones. It fits. They have a new album. It’s called Livin’ In a Bitch of a World. Like their previous two albums, it’s filled with fuzzy, blues-y, raw n’ ripping odes to the cheapside of life, story songs about hard luck gamblers, street-fighters and steely-eyed tough guys. Also like all of their previous albums, every word is true, more or less. Take the first single, Two Stroke Machine, for example. It opens with the immortal line, “My dad pulled a gun on my granddad one day.” And he totally did.

“Yeah, that song is about me and my dad, an incident that happened when I was about 2 years old,” nods 7Horse’s drummer-slash-frontman Phil Leavitt. “My dad was a loose cannon back then, kind of a Charles Bukowski type figure, and there was a beef in the house between him and my grandparents, and he pulled a gun on them. My mom was there too. My dad plays a cameo in the video for the song. He loves it. My parents are long divorced but my mother, she had a visceral negative reaction to the song. She really didn’t like it.”

“It was an interesting situation to say the least,” says Leavitt. “ I have never played a song for my mother and had her go, “Oh I hate that”. I think because it brought her back to that day.”

“When he brought that to me, I thought it was one of the best opening lines I’d ever heard,” adds Calio. “So clean and pure.”

Leavitt’s background looms large in 7Horse’s sound and vision. He grew up in Las Vegas, during its heyday of excess and depravity in the 1970’s. It’s there in the lyrics and the atmosphere and in their live show. I witness them bashing out their smoky barroom rock’n’roll to a sparse but enthusiastic crowd one lonesome Sunday night in Boston and the room was thoroughly transformed into a seedy lounge full of creeps and dames and murder kings through Leavitt’s witty banter and the band’s full-bore dedication to authentically hard-edged rock’n’roll.

“This show we do, it’s like a combination of a rock show mixed with like a Las Vegas lounge act,” explains Leavitt. “I grew up with that classic show business world. You know like when you’d stay up late to watch Johnny Carson and see guy like Don Rickles? That was my actual childhood. I grew up in Vegas in the 70’s, the old school Vegas. People wore suits and I was running around casinos when I was in single digits. I had a job at the casino when I was 13. I grew up in that environment, and it makes it’s way into the lyrics. We’re coming from a dirty rock’n’roll angle, we want to perpetuate that atmosphere.”

And they do, from every angle. Even their name is an homage to Leavitt’s misspent youth.

“7Horse is a gambling thing,” he explains. “Betting on the 7th horse. My grandfather was a pitboss at the Stardust casino and he played the horses, every day, for sixty years. After he retired I used to take him to the races and that was one of his bets that I remembered, betting on the 7 Horse.”

That’s fitting, seeing as 7Horse has been a gamble since the beginning. If Leavitt and Calio’s names sound familiar, that’s because they’re two-thirds of dada, a popular 90’s alt-rock band most well-known for their ’92 hit Dizz Knee Land. While dada have had their ups and downs over the years, the band has endured, last touring in 2012. But when they realized their most creatively productive days were behind them, Leavitt and Calio decided to break out on their own.

“If you’re in a band for 20 years, it’s always part of your life,” Leavitt says about dada. “We got to the point where we really wanted to do something new. We had done a lot of touring with dada and we wanted to avoid becoming a nostalgia band. We have a good solid fanbase, but we really wanted to continue to be creative. When a band loses that element of that creative spark, then you’re just a nostalgia act. It’s a good way to make money, but that’s not what we wanted to do. We wanted to go in the studio and make a record. And we just couldn’t get the third guy to play along. So the two of us decided to go in the studio to see what happens.”

What happened was Meth Lab Zoso Sticker, a dusty, arid death-blues number that reeked of danger and long-lost weekends. The song ended up on the soundtrack of Martin Scorsese’s Wolf of Wall Street film, propelling the band into the spotlight. A million youtube hits later and the band was on their way. The first album, Let the 7Horse Run, was released in 2011. Their second, the masterful Songs From a Voodoo Wedding, followed in 2014. And by that time, dada was in the rear view mirror.

“This is our main band now,” confirms Leavitt. “We’re out here putting everything we’ve got into it.”

Which bring us, neatly, to Livin’ In a Bitch of a World. Anchored by Two Stroke Machine and a surprisingly gritty cover of the Bee Gee’s enduring disco classic Stayin’ Alive, Bitch is classic 7horse, dangerous rock’n’roll for dangerous times created by two dudes with a closet full of sharkskin suits and an deep pool of terrible true tales to tell.

“It’s like, have you been following the presidential race in this country?” Laughs Leavitt. “And given the state of the music industry, it also fits there. I think it’s a title that resonates with people. For me it just seemed right.”

“It’s not even about it being time to give up or anything,” explains Calio, “It’s about being time to raise the flag and just own it. Yeah, a lot of things suck, but let’s just get through it, let’s just call it what it is and move on.”

“This whole record is about perseverance and survival,” says Leavitt. “We’re out here fighting for our lives, basically. There’s so much traffic out there, it’s really difficult to break through. How do you get people to leave the house? We had a song on an Oscar-nominated movie, the video got a million hits on youtube, they used it on the NFL, I mean we’ve gotten a lot of exposure, but it’s still difficult to get people to come out and see you for $10. And it’s not just us, it s a lot of bands. It’s tough. Live music, touring bands, it’s not gonna continue to be around if people don’t support it. It will go away. There’s no way to sugar-coat it. It’s a bitch.”

It sure is, man. But something tells me these two can handle it. As for the future, expect more, not less.

“We’d like to do 200 plus shows a year, all around the world. We know we have fans all over the planet and we want to go out and play for all those people,” says Leavitt.

“Bigger venues, more people, better sound. We just wanna do it at the highest level we can,” adds Leavitt.