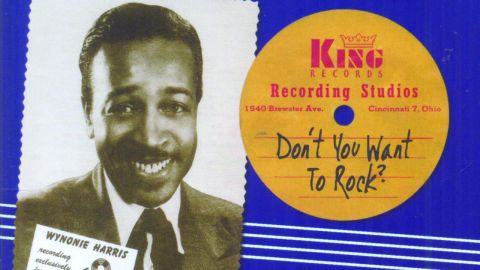 Wynonie Harris’ voice was an incredibly strong muscle, and in his heyday in the late 40s and 50s, when he was recording for King, he flexed it to dramatic effect against a fabulous backdrop of small jazz orchestras playing the blues.

The earliest sides compiled in this collection, from 1947, are conventional blues numbers that often sound as if Harris is making them up as he goes along – and who knows, maybe he was – and leave plenty of space for the brass and reeds players. On Love Is Like Rain the band plays an intro and three choruses before he even comes to the microphone, while Blow Your Brains Out is virtually a feature for tenor saxophonist Tom Archia.

After a while, however, King began to tilt Harris’ repertoire towards suggestive, bawdily-titled material such as I Want My Fanny Brown, Sittin’ On It All The Time and I Like My Baby’s Pudding – amusing jukebox numbers at the time, but rather one-dimensional when heard in a largely unvarying sequence.

Ace have assembled on one disc here the issued masters and on the other various rejected takes of those songs, plus some wholly unissued sides including From Good To Bad Blues and Triflin’ Woman. Everything comes from the original acetates (these 1947–50 sessions predating King’s use of tape), and the sound is amazing as a result. In fact, you’ll actually hear Harris far better on these discs than anyone did when these 78s were issued in the first place, because King, having made excellent studio recordings, then diminished them by pressing them on third-rate shellac.

The collection stops when we reach 1950, by which time Harris had recorded his hit cover of Roy Brown’s Good Rockin’ Tonight but had yet to work on the other songs he’s best remembered for, such as Bloodshot Eyes or Good Morning Judge. So this is not the Harris CD to recommend to beginners, who will do better tracking down a more wide-ranging compilation. But if you already know and enjoy some of his work and want to dig into it more assiduously, this set demands your immediate investigation. As always with Ace, the presentation is absolutely flawless, and Tony Rounce’s commentary on the sessions is so vivid and detailed, is might have been written by an observant fly on the studio wall.