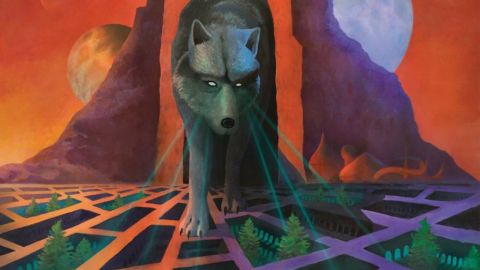 As one-man bands go, Andrew Stockdale is certainly making a relentless fist of it. His ‘Aussie Zep’ rock band Wolfmother fell to pieces in 2012 only to ‘re-form’ sharpish when Stockdale’s solo career stalled, and he writes and plays almost everything on this fourth album.

Abetted by producer Brendan O’Brien, various drummers and bassist Ian Peres playing keyboards, Stockdale fills out his full-band disguise impressively, but his ideas sadly sag. As brawny and perm-shaking as The Love That You Give sounds, it might as well be called Whole Lotta Chutzpah, while the title track shifts from Who-style prog to Deep Purple chug without pausing to grasp at a single 21st-century thought, bar a passing nod to Matt Bellamy’s choral vocals.

Hints of the White Stripes, Muse, the Black Keys and Mumford & Sons pepper the tracks including The Simple Life and Gypsy Caravan, and plaintive big ballad Pretty Peggy has gotten the hang of the brainless wail-along chorus favoured by the multitudes that buy Bastille records.

But as Best Of A Bad Situation resorts to unreconstructed Stones strutting, Stockdale’s magpie career continues to show not an inkling of musical mutation. Let’s call it treadmill rock – one man putting a lot of effort into going absolutely nowhere.