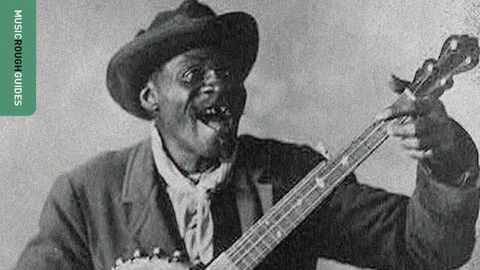 Spotting song titles such as Midnight Special, The Spasm or the surreal A Chicken Can Waltz The Gravy Around, you know you’re not in Kansas City Blues territory any more. Most of these recordings from the 1920s and 30s are not in the blues form, nor were their makers full-time blues singers. They stood at a musical crossroads: behind them, slowly receding, the rags, reels, ballads and popular songs of the late 19th and early 20th centuries; ahead, the new blacktop highway of the blues. Theirs was the last generation that would travel easily back and forth over that junction. Fortunately they did so in the era of sound recording, leaving us first-rate performances of kinds of African-American music that would otherwise have survived only in folklorists’ text collections or the fading memories of the aged.

Performances, that is, such as Furry Lewis’s spirited retelling of the story of John Henry (The Steel Driving Man), Will Bennett’s of the outlaw Railroad Bill and Mississippi John Hurt’s of the Albert-killing Frankie. Jim Jackson’s What A Time conjures up plantation days when you didn’t need to do much work if your girlfriend served in the white folks’ kitchen and could slip you the leftovers. Such stereotypes of black behaviour, promulgated in the ‘coon songs’ of the minstrel era, were enthusiastically, if no doubt ironically, perpetuated by later black musicians; that waltzing-the- gravy song, done here by Stovepipe No.1 and David Crockett (really), is a hymn to chicken-stealing. Luke Jordan’s Pick Poor Robin Clean is a bird of a different colour, a cloaked and coded song about being black and getting by.

Peg Leg Howell got by dealing in coal and firewood, or at any rate describes that trade vividly in Coal Man Blues, while Charley Patton recalls crop failures in Mississippi Boweavil Blues. Distant memories of the first world war seem to echo in Papa Harvey Hull & Long Cleve Reed’s Hey! Lawdy Mama – The France Blues and perhaps Cannon’s Jug Stompers’ Going To Germany. Juxtaposed with these serious narratives are good-time guitar music by Blind Blake (Come On Boys Let’s Do That Messin’ Around), Frank Stokes (How Long) and the boisterous duo of Pink Anderson and Simmie Dooley (Every Day In The Week Blues), and the vaudeville comedy of Papa Charlie Jackson in Your Baby Ain’t Sweet Like Mine and Hambone Willie Newbern in Nobody Knows (What The Good Deacon Does).

Proving the common ownership of some of these ancient songs, two recordings here are by white musicians, both of whom are from the coalfields of West Virginia: Frank Hutchison, narrating the bad-man ballad Stackalee and Dick Justice singing a Cocaine he almost certainly learned from a record by Luke Jordan.

This is all fascinating and often surprising music. Sometimes it’s funny, as in The Spasm, a version of You Rascal You by Daddy Stovepipe & Mississippi Sarah, a high-energy two-person jug band; sometimes moving, as in Richard ‘Rabbit’ Brown’s monumental James Alley Blues. As often with Rough Guides, though, the variable transfer quality robs the album of a point.