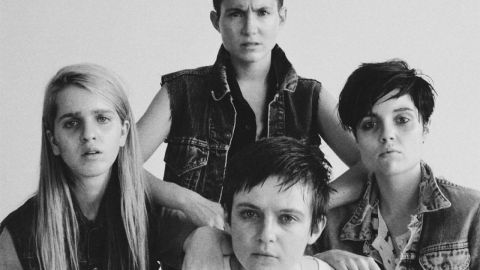 By God, they’re jaunty. The Vaccines on their second album have matured their catchy pop sensibility. Belters No Hope and Aftershave Ocean prove they can write songs with verses, choruses, middle eights and matching collar and cuffs, while their sense of Screaming Lord Sutchery remains in songs like Ghost Town.

They are poster boys and they have musical wit and invention, rare things for an indie guitar band. Perhaps ironically, the only downside is their inventiveness; they borrow like a latter day Nick Lowe but don’t always assimilate the way great pop singers do.

As a consequence, rockabilly roisterers sit next to George Harrison tributes (All In Vain wears its slide-guitarish riff uncomfortably) and 60s fairground exuberance stands uneasily with new-wave jerkiness.

For a band who’ve aimed for the sexy middle ground between The Ramones and The Strokes, The Vaccines sound occasionally like a Kaiser Chiefs tribute band.