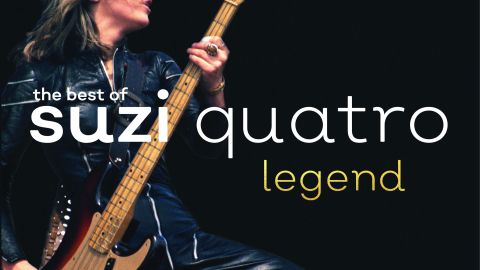 Before anyone, there was Suzi. Bass-player and singer with the terrific all-girl 1960s garage band The Pleasure Seekers – the band she formed with her sisters at the age of 14 in Detroit, Michigan. Original leather catsuit clad inspiration for Joan Jett. Doubtless you know her eight Top 20 UK hits between 1973 and 1979; the tremendous Can The Can, the electrifying Daytona Demon, the rampant Devil Gate Drive, and so forth. Alongside Glitter and Holder and Bowie, she defined glam rock on British (and Australian) screens during that era – but she always had a harder, leaner edge than her contemporaries.

All the aforementioned are present on this handpicked-by-the-lady-herself compilation, as are other great floor-fillers (If You Can’t Give Me Love, 48 Crash, She’s In Love With You) and lesser known but equally fine numbers such as the wink-and-a-nod Skin Tight Skin and Shine My Machine.

Further down are a couple of forgettable fillers (Suicide, Wiser Than You) and a few cannibalistic moments, but man! Suzi Quatro – what a legend!