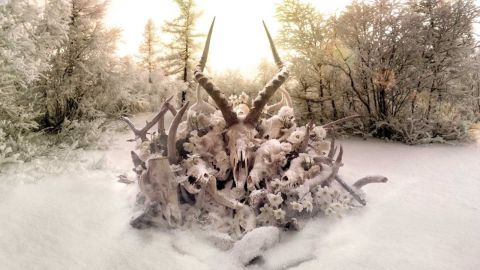 The culmination of Soundgarden’s three-year comeback campaign has finally arrived with the ravenously anticipated King Animal, the band’s first new album in 16 years. The build-up has been nothing short of epic. From the 2010 reunion announcement via a semi-cryptic tweet, through the subsequent releases of a compilation album (Telephantasm: A Retrospective), a live album (Live on I-5), a box set (Classic Album Selection), the re-release of an old single (Hunted Down), the release of a previously unreleased single (Black Rain), the release of a new single (Live To Rise), and a main-stage appearance at Donington, the band have delivered a veritable masterclass on coming back.

Maddeningly, the grunge godfathers hung it up just when things were getting interesting. The one-two punch of 1994’s Superunknown and 1996’s Down On The Upside saw Soundgarden relying less on the unfocused bombast of their early releases and more on ambitious song structures, acoustic texturing and increasingly nuanced production.

While …Upside shouldered the imposing weight of following the singles-rich, multi-platinum colossus Superunknown, King Animal faces the more manageable task of following a long hiatus. With no recent album in the rear-view mirror providing a relevant point of comparison, the primary question hanging over King Animal is not ‘What’s their new direction?’ but ‘Have they still got it?’ The answer is a massive ‘Yes.’

‘You can’t go home, no I swear, you never can,’ singer Chris Cornell roars, tongue-in-cheek, to ignite the blistering opener Been Away Too Long, kicking off a punishing trio of sonic missiles (with the scorching Non-State Actor and the marauding attack of By Crooked Steps), clearly aimed at eviscerating any doubt regarding the band’s vitality. This is every bit your father’s Soundgarden and then some, aged exquisitely and distilled into a bracing new blend of rumbling, oceanic rhythms, mountain-sized hooks and the lean, inimitable attack of guitarist Kim Thayil.

Non-State Actor, seething with the swirling, rhythmic interplay between bassist Ben Shepherd and drummer Matt Cameron, most conspicuously betrays the passage of time in the clarity of Chris’s howl. His once-piercing wail has been filed down to a scratchy, primal bellow that achieves the unthinkable – it somehow manages to add even more testosterone to their sound.

King Animal is an aggressive and tightly focused continuation of the band’s mid-90s evolution, offering a diverse sampling that includes a lumbering stoner feast (Blood On The Valley Floor), a comely ballad (Bones Of Birds) and the acoustic-driven duo of Black Saturday and Halfway There. Somewhat disappointing is the air of restraint that hangs over songs like the riotous Attrition, which begs for a skull-piercing guitar solo that never arrives.

Nonetheless, with so many rich flavours, muscular riffs and meaty lyrics, repeated listens yield a sumptuous payoff and King Animal establishes that Soundgarden are back with enough of the swagger and vision of their finest efforts to signal a rousing return to form.