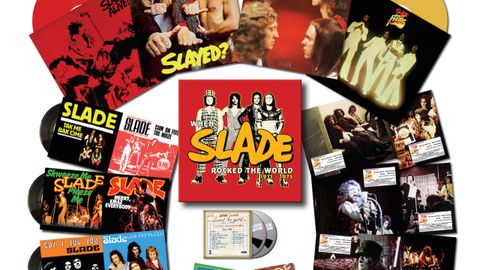 You spend years telling people that ‘a Slade is not just for Christmas’ and then they go and release something so intrinsically festive that you might as well stuff a fistful of sage and onion up it.

Okay, let’s take it as read that you’re fully aware of the genius of Slade. You know they’re the 70s equivalent of The Beatles in terms of both hits and hollering halls of richly hormoned teens unaccountably bewitched by homely provincial minstrels, and that artistically, they fashion tunes of such emotional eloquence and melodic majesty that if Nobel gave Peace prizes for misspelt barn-storming foot-stompers Noddy’d need a second home in Norway.

So have sufficient bells and whistles been employed this time around to convince us that Slade rocked the world and are the results worthy of yuletide stocking room?

Short answer? Yes. Their four best albums Slade Alive! to Slade In Flame inclusive are all here on brightly coloured vinyls, alongside a quartet of double-sided, single-only hit seven inchers, all in garish picture sleeves, the whole lot on double CD, an interview flexi, a repro of George Tremlett’s 1975 book The Slade Story and, oh yes, a 10-inch Slade annual, packed with ample memorabilia to numb you to the turkey-associated rigours of Boxing Day.

BB King: *Live At The Regal*

Woke up this morning, and ordered myself some plastic. Described by The Blues magazine as the greatest live blues album ever, Live At The Regal gets a limited edition, opaque blue vinyl reissue from the excellent New England retailer where Aimee Mann used to work.

This isn’t out until mid-January, but the nice folk at Earache are already slaking the thirst of eager punters with a limited edition white vinyl version featuring a photo-card signed by the band, and a “bonus art print” of the album sleeve itself. So you can look at it twice, at once.

Never previously available on vinyl, Izzy’s second studio album was as influenced by surf music and rockabilly as it was by the Stones, and is perhaps the most satisfying Guns N’ Roses-related release outside of Appetite itself. Book early to receive the marbled blue plastic edition – there’s only 1,000 copies.