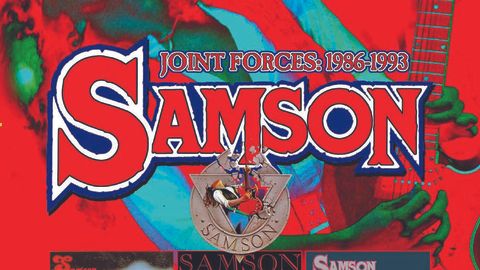 When guitarist Paul Samson died on August 9, 2002, he left a complicated back catalogue. This two-CD set brings together three albums from a particularly muddled period (following three albums with Bruce Dickinson and two featuring Nicky Moore) of solo work and stylistic switches.

The first, and best, is 1986’s Joint Forces (6⁄10), here as remixed by Paul in 1993. Initially intended as a solo album, it was released under the Samson banner because it once again featured the stunning blues tones of Moore and, despite its conception, sounded like a continuation of Samson’s most commercially successful era.

The personnel had changed, though, with a new rhythm section including ex-Gillan bassist John McCoy. There are backing vocals by Rock Goddess, whose Jody Turner also shares lead vocals on the excellent Tramp, and the album fairly rocks along before the big ballad finale (featuring Colin Towns on piano) called Reach Out To Love.

Two years later, though, a completely new, would-be radio-friendly band featuring Mick White on vocals cut 1988 (4⁄10). Awkwardly, the album straddles these two discs and The Silver Screen and Good To See You aside, its keyboard-laced sound hasn’t dated well, trying too hard to impress a slicker, MTV-dominated world.

On Nineteen Ninety-Three (5⁄10) Paul reverted to a three-piece (with Chris Aylmer on bass), singing lead vocals himself. The songs are far from innovative but at least represent a fine guitarist following his heart – and his love of Hendrix, Mountain and ZZ Top – and sounding all the stronger for it.