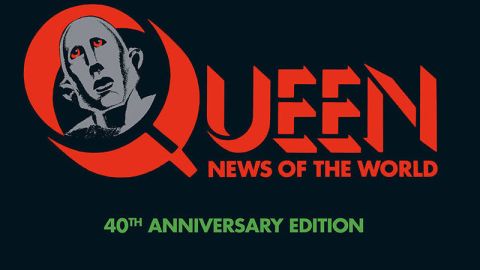 The sixth Queen album has the status of an indelible reference point in rock history, thanks largely to its two monstrous, magnificent opening anthems, We Will Rock You and We Are The Champions. Its Frank Kelly Freas artwork has carried a near-classic “terrifying robot” plot line on Family Guy, and its recording sessions are immortalised as the ones where Freddie Mercury replied to Sid Vicious’s in-corridor query as to whether he was still bringing ballet to the masses with: “Oh yes, Mister Ferocious dear, doing our best.” It gave them quadruple-platinum success in the States, and despite moderate British success, it rather pooh-poohed the notion that Queen were too elaborately indulgent to survive punk’s cull.

All of which is odd, given that it was a transitional, somewhat piecemeal construction that few would argue was one of their best. Yes, it’s fun, because many of the individual tracks are laser-guided belters, but it has no real cohesive identity.

Rather than giving Mercury and May the lion’s share, it’s democratically divided between four writers, as if Queen were 10cc in flashier clothes. Fortunately, Deacon and Taylor, at least short-term, brought viable ideas, and their colleagues never knowingly undersold any piece of music ever. So they ditched the pacey, adrenalized prog of their early work and the subsequent operatic attempts to outdo Bohemian Rhapsody. If punk was the new thing, they’d get honed and heavy.

Taylor’s Sheer Heart Attack – which, confusingly, hadn’t been finished when the far superior 1974 album that bore its name came out – is a frenzied low blow, sniping at the band’s in-vogue detractors.

Prior to that, May, with the fat-free, stomp-stomp-clap genius of We Will Rock You, and Mercury with that championship-winning ballad, have made hard-to-top statements. The album’s madly frontloaded, though Deacon’s Spread Your Wings is one of the most undervalued Queen songs. Freddie gives the vocal everything, getting so emotionally caught up that he pronounces ‘very far’ as ‘werry far’, and it has a yearning melody and chorus that other bands would kill for.

From here on, the album becomes a slightly random jukebox. Four decades of familiarity have granted it a sense of structure, but it leaps from Taylor’s warped disco premonition Fight From The Inside (cited by Slash as one of his favourite guitar riffs) to Mercury’s pouting Get Down Make Love (later covered by Nine Inch Nails). Sleeping On The Sidewalk nods to the blues, while My Melancholy Blues doesn’t, but has Freddie back in camp cabaret mode.

May’s It’s Late is the most ambitious track, pitching itself as a three-act play and seeing May adopting the then-novel ‘tapping’ playing technique. It strains to be epic more than Queen usually have to, but clambers to its goal eventually. This all adds to the sense of a peculiarly eclectic album, self-produced, which is glued together purely by the force of Queen’s personality.

Despite damping down their instincts so punks wouldn’t spit at them, they still sound like flamboyance has burst through the wall, riding a Harley and wearing a tiara. They can’t help identifying as themselves, even when treading water to satisfy the arena crowds.

So what new News has been excavated?

Well, as deluxe editions go, this makes a proper effort. Book of photographs, posters, a pure analogue vinyl re-cut, and three CDs: the original album plus 11 “raw sessions” (demos and alternative takes) and 19 bonus tracks (BBC sessions, along with live and instrumental takes).

The raw sessions are ordered to offer a radical reading of the album, in sequence. Freddie sings May’s All Dead, All Dead; We Are The Champions is looser, longer; other tracks just ad lib more as they fade. For full-on Queen fans, this chance to hear previously inner-circle-only Mercury vocals, in his pomp, will be irresistible.

Then there’s a DVD documentary, Queen: The American Dream. One hour of footage shot on their 1977 world tour by Bob Harris and crew for a film that never reached fruition, it includes exclusive live clips from Houston.