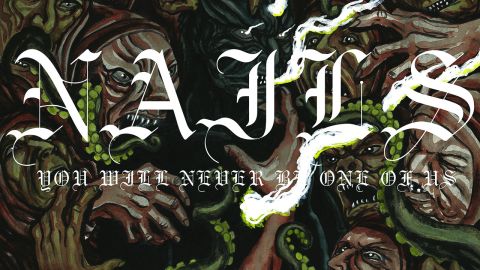 With 2013’s Abandon All Life, Nails announced themselves as the nastiest, heaviest band on the planet in just 17 minutes of uncompromising, grisly aural sadism.

After further cementing their reputation with awe-inspiring live shows across the globe, third album You Will Never Be One Of Us is arguably even more visceral, yet with subtleties that make it a slightly better crafted attack than its wild spirit may initially suggest.

Centred around eight tracks that hover around the 60-80 second mark, the sheer intensity of the band’s monstrous melding of grindcore pandemonium, thrash intensity and hostile d-beat crust still mauls the senses, both exciting and disturbingly bleak in equal measure. The title-track’s announcement through squalling feedback leads to a barrage of clattering, lo-fi noise and Todd Jones’ barely decipherable howl, with the following 12 minutes a relentless barrage of Kerry King-esque divebomber leads, viscous breakdowns and sheer force of will that engulfs the listener in inescapable claustrophobia. All this culminates in eight-minute closer, They Come Crawling Back, which draws out increasingly grim breakdowns and torturous sucker punches that bullies the listener out of any hope that still remained. Make no mistake, this is as ugly and horrifyingly riveting as heavy music gets.