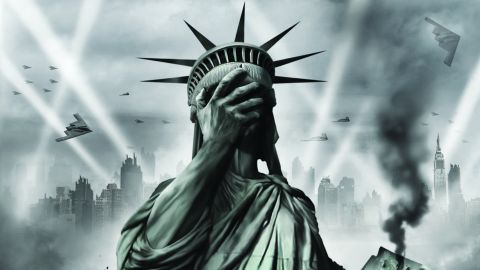 Industrial metal’s take on modern America can often feel histrionic and full of apocalyptic overkill. But in Donald Trump the USA has delivered a target ripe for this treatment. and AmeriKKKant feels like a measured response to the times. Al Jourgensen’s decision to revive Ministry feels apt.

Opener I Know Words is stretched over an elongated sample of Trump’s inauguration speech, an agony of twisted East European violins and locomotive, industrial undertow. The bomb lands with Twilight Zone, its heavy-duty riff churning up despair at the sheer stupidity of Americans that gave rise to their worst ever leader.

The rest of the album is an everything-but-the kitchen-sink assault of collage, scratch, Tackead-type samples, metal and funk, a blazing regurgitation of the media mania and misplaced rage of modern USA, typified on TV 5-4 Chan and Wargasm. Antifa heralds the heroes of the current strife with a stalking, Buttholes-style bass, a barrage reprised on Amerikkka. The titles are devastating in their own right; Victims Of A Clown might have felt like a cartoon scenario 10 years ago, today it’s reality.