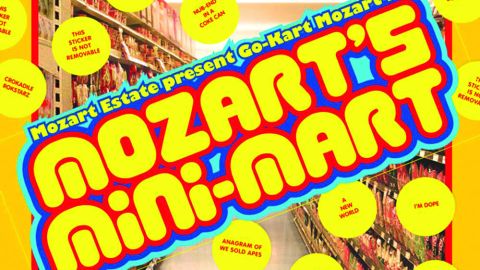 Those of us who know, care. Lawrence of Belgravia is a bona fide, solid gold, unsung pop genius.

Felt (1980s) were the band The Smiths never could have been: dark, sardonic, literate, melodic guitar-pop.

Denim (1990s) were bubblegum, too smart – named after the same Dead Kennedys song as Suede, and ineffably more fascinating.

Go-Kart Mozart (now) are everything claimed mostly correctly for Pulp, but… damn, it’s like Neil Innes ruled the world, not The Beatles. Ray Davies and Joe Orton waltz in the aisles while Chopin plays roulette, the sardonic Satan is back home to roast, commercial genius tumbling out of every groove. (This is the man who withdrew from popular music because Princess Diana died.)

When You’re Depressed is the jauntiest, most real song about depression since Paint It Black. Zelda’s In The Spotlight recalls genius early Mute made-up childlike electro-pop band Silicon Teens.

If you can resist an album that features a glam-stomp titled 12 Knickers On The Line By 3 Chord Fraud you’re a better person than I am.