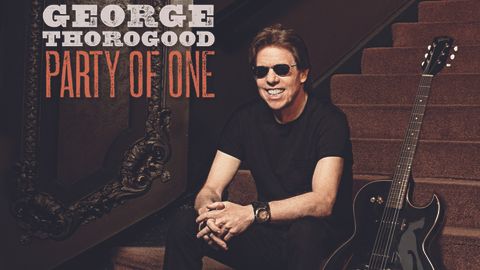 If George Thorogood is known for one thing – other than hammering out the slide-guitar riff to his now signature tune Bad To The Bone (a song he first unveiled when he opened for the Rolling Stones on their 1981⁄82 Still Life tour) on his Gibson ES-125 – it’s for four decades of electrifying meat-and potatoes blues with his band The Destroyers. So commemorating their 40th anniversary with a mostly unplugged solo album seems an odd choice. But Thorogood, whose professional career began in the early 1970s with him playing such solo acoustic sets, claims that this album was “long overdue”. Returning to Rounder Records, the Nashville label that launched The Destroyers in 1977, must therefore also make sense.

Party Of One opens with Robert Johnson’s I’m A Steady Rolling Man (a song that’s 80 years old yet here still sounds fresh as a daisy), and across 14 tracks (the CD adds a fifteenth) Thorogood pays homage to the songwriters who made him.

It’s a simple premise, and producer Jim Gaines (who worked on three Destroyers albums between 2003 and 2009 and also has credits with Stevie Ray Vaughan, John Lee Hooker and latterly Joanne Shaw Taylor) keeps it simple; only a smattering of songs feature noticeably double-tracked guitars, among them a cover of Bad News, originally on Johnny Cash’s I Walk The Line, and another country classic, Pictures From Life’s Other Side by Hank Williams.

It’s not entirely acoustic – Thorogood plays an electric guitar for the slide work on the opener, Elmore James’s Got To Move, and also a cover of John Hammond Jr’s Tallahassee Women – but mostly this sounds like one man on a stool cradling his guitar and pouring out his heart.

This works as superbly on the relative obscurity Born With The Blues, by Brownie McGhee, and the better-known Elmore James standard The Sky Is Crying on which the strings of his steel resonator guitar rattle like a snake.

Only a fool would claim the last-named track tops The Destroyers’ barnstorming version, but only a killjoy would say Party Of One misses its target.