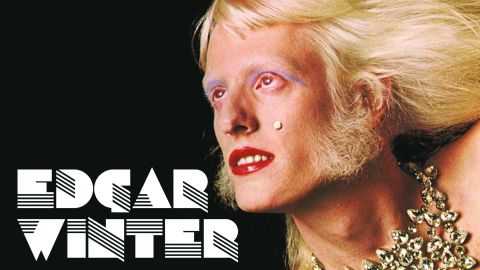 Edgar Winter’s freewheeling career through the 70s was untrammelled by any petty constraints such as style or continuity. A quick flip through the miniaturised covers of these 10 albums rounded up into two box sets proves the point perfectly; no two consecutive sleeves appear to have any connecting link.

It doesn’t help that he released these albums as Edgar Winter, the Edgar Winter Group or Edgar Winter’s White Trash. And while the two box sets separate his solo albums from his band albums the division is somewhat arbitrary

Musically, Winter crossed genres with abandon, because he could. In contrast to his older brother, the more taciturn Johnny who sank himself into the blues, Edgar, a musical prodigy, had an ebullient enthusiasm for all manner of styles – pop, jazz, soul, funk, blues and rock’n’roll – that was reflected in song titles like We All Had A Real Good Time, Still Alive And Well and Keep Playin’ That Rock And Roll. Some po-faced critics frowned upon such frivolity and Winter seldom got the acclaim his talents as a keyboard player, saxophonist and composer deserved. But audiences lapped up his party attitude and his albums caught that atmosphere.

The six-CD I’ve Got News For You (8⁄10), is the better set because it features Winter’s mates including Rick Derringer, Ronnie Montrose and Dan Hartman – white trash indeed! It also includes Winter’s two best albums, 1971’s self-titled debut from Edgar Winter’s White Trash where the infectious rock’n’roll boogie is broken up by a couple of gospel-tinged songs (Fly Away and Save The Planet) and the poignant anti-war ballad Dying To Live, and 1972’s They Only Come Out At Night by the Edgar Winter Group which features two of his biggest hits, the monstrous instrumental Frankenstein and Free Ride. The live White Trash album, Roadwork, follows close behind with an extended version of Tobacco Road featuring Winter’s trademark scream.

The four-CD Tell Me In A Whisper (6⁄10) set gets off to a rollicking start with Winter’s 1970 debut, Entrance, where the first half dozen songs are cleverly segued together. But the late-70s albums struggle to maintain quality and 1981’s Standing On Rock is an ill-advised venture into sci-fi.

The only missing album from Winter’s halcyon 70s output is his classic album with brother Johnny, Together from 1976, probably for contractual reasons. But there’s more than enough to be getting on with here.